U.N. Inaction on Democratic Republic of the Congo
All Actions of the UN Human Rights System Critical of Specific States, 2014 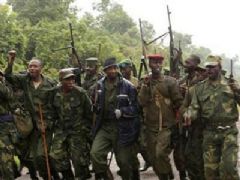 Kinshasa - About 100 people were slaughtered last week in the east of the Democratic Republic of Congo in the latest massacre to shake the restive region, lawmakers told AFP on Monday.

The carnage took place on Thursday near Beni in the North Kivu province, where mainly Muslim Ugandan rebels have been blamed for killing more than 200 civilians in gruesome machete attacks since October.

"I have a figure of 95 bodies buried in a common grave," as well as "nine others that were shown to authorities in a morgue," opposition member of parliament Juma Balikwisha told AFP.

"We still don't have a definitive toll. It lies between 70 and 100 people killed," said Albert Baliesima, an MP for the parliamentary majority backing President Joseph Kabila.

The Civil Society of North Kivu, an NGO based in Beni, blamed rebels of the Allied Democratic Forces and National Army for the Liberation of Uganda (ADF-NALU) for the latest in a wave of massacres that began early in October.

However, regional officials who spoke to AFP said they did not know who carried out the killings in a region where the Congolese army (FARDC) and a UN special intervention force have been battling the ADF-NALU since January.

"We were told that the (FARDC) didn't want people to go further into the bush," where more bodies could yet be discovered, Baliesima added.

An administrative source in Beni said that the killings took place in four villages close together between the market town and the town of Mbau, 20 kilometres (12 miles) further north.

Reached by telephone, a local resident told AFP that 95 bodies picked up in the bush had been buried in the village of Tepiomba.

North Kivu's governor, Julien Paluku, said Friday that nine bodies had been taken to a morgue. The Civil Society of North Kivu said that at least 50 people had died, according to "one of the survivors".

The population of Beni, a major trading centre and stronghold of the Nande ethnic group located 250 kilometres (155 miles) north of the provincial capital Goma, has accused the government and soldiers of doing nothing to protect local people.

The UN special envoy to the central African Great Lakes region, Said Djinnit, said in a statement Monday "that the worsening situation in the Beni area ... calls for decisive action towards neutralising all negative forces in the DRC, as per the decisions of the regional leaders and the UN Security Council."

President Kabila visited Beni at the end of October and publicly swore that the army was "going to win against the terrorists", but his presence failed to prevent a massacre within the town.

Demonstrating residents on November 2 pulled down a statue of the president at the "Kabila roundabout" and burned the flags of the ruling coalition that supports him.

The ADF-NALU rebels, believed to number around 400, have hidden in the Ruwenzori mountains that straddle the border with Uganda since being driven out of their homeland by President Yoweri Museveni's soldiers in 1995.

In their joint offensive, the Congolese army and troops of the special UN brigade appeared to make gains against the Ugandan insurgents until August, when the respected commander of FARDC troops suddenly died of a heart attack.

The rebels bounced back, but the combined forces renewed major operations against the insurgents in October. The brigade with the large UN mission in the DRC has an offensive mandate to tackle armed movements in the east, which has been a powder keg for more than 20 years.