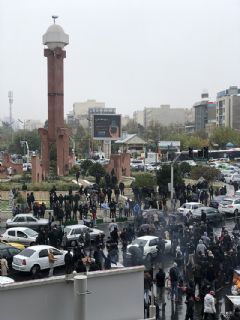 Thirty-six people have died since protests erupted across Iran, according to Radio Farda, while the Iranian opposition reported earlier that 27 people were killed during these protests.

Al Arabiya and Al Hadath television sources reported that the Iranian security forces fired tear gas to disperse protesters in Martyrs' square in the capital, Tehran, while protests were reported across the country under a unified slogan: "The gasoline uprising."

Fars news agency also reported that 1,000 protesters across the Islamic Republic were detained during the last 48 hours, while 100 banks had been torched.

Iran's Supreme Leader Ali Khamenei on Sunday backed the gasoline price rise that has caused nationwide protests, which he blamed on the Islamic Republic's opponents and foreign foes.

"Some people are no doubt worried by this decision ... but sabotage and arson are done by hooligans, not our people," the Iranian Supreme Leader said in a live speech on state TV.

Some Iranian lawmakers, who planned to discuss ways to force the government to revise its decision, withdrew their motion after Khamenei's Sunday speech, Iran's state media reported.

Iran's Intelligence Ministry said in a statement reported by the Tasnim news agency that the protest leaders had been identified and "appropriate action" was being taken.

"People have the right to protest. But that is different from riots. We cannot let insecurity in the country through riots," Iran's Hassan Rouhani said.

Iran imposed petrol rationing and raised pump prices by at least 50 percent on Friday, saying the move was aimed at helping citizens in need with cash handouts. Anti-government protests have erupted in over 93 Iranian cities since the decision was announced.

In the meantime, the Iranian National Security Council approved a draft law to regulate fuel consumption and called on parliament to take the necessary measures to control and supervise gasoline prices so as not to harm the people, according to the Mehr news agency.

Protests have intensified and spread to more than 100 Iranian cities and territories.

Iranintl.com reported that a large number of cars blocked the highway in Tehran on Sunday.

Protesters in the central city of Isfahan set ablaze a police station on Sunday.

Iran has almost completely shut off access to the internet across the country as protests over an increase in fuel prices intensified for the second day, cybersecurity NGO Netblocks confirmed in a report.

Despite the nationwide internet blackout, Iranian activists on Twitter have been taking to the social media platform to share videos and updates on the demonstrations, triggered by fuel rationing and price hikes.

Videos circulating on social media from the city of Eslamshahr, showed Iranian protesters burning a picture for Supreme Leader Ali Khamenei and chanting "Death to the dictator."

According to Al Arabiya, authorities closed the metro in Tehran and Isfahan to prevent the movement of protesters. Fars news agency said 60 buses and five metro stations were damaged during the Isfahan protests.