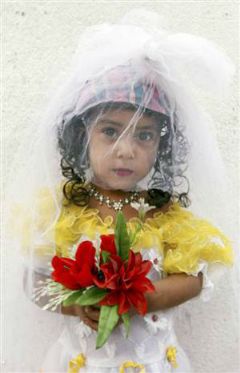 LOS ANGELES, CA (Catholic Online) - The incident has sparked much outcry among human rights activists in the Kingdom.

A member of the Saudi National Society for Human Rights, Suhaila Zein al-Abedin has urged authorities to intervene to save the child, "and to save this child from tragedy."

Abedin noted that marriage in Islam must be based on mutual consent. This was apparently against the girl's consent as demonstrated by the girl's move to lock herself in the room.

She said the girl's parents were also to be held responsible for marrying their daughter to a man the age of her great grandfather.

Abedin wishes to remind others that the minimum age of 18 remains the legal age of marriage in this nation. Some feel that if this incident is acted upon, it could lead to a wave of prosecution for many others in such arranged marriages.

Activists have taken to social networking sites to criticize the parents of the girl for giving her to a man many decades older than her.

The groom insists that his marriage was "legal and correct," and that he paid a $17,500 dowry to marry the girl, who is the daughter of a Yemeni father and Saudi mother.

Speaking of his arranged wedding night, he said his bride entered the bedroom before him, and she locked the door from inside so he could not enter. This, he said, made him "suspicious about some kind of conspiracy" by the girl and her mother.

Friends of the bride say she was frightened on the wedding night, and locked herself in the room for two successive days before fleeing back to her parents' home.

Forced marriage may subject girls to abuse and violence, and this could lead to their suicide if nothing is done to save them, psychologist Jamal al-Toueiki reiterates.