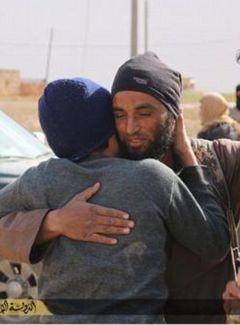 The group of executioners made a display of hugging the blindfolded couple and telling them they were forgiven of their 'sins', before pummeling them to death with hundreds of fist-sized rocks

A Hug from the Executioner… Then Two Gay Men are Stoned to Death: ISIS Murderers Stage Show of Kindness for the Cameras Before Brutal Killing

Depraved militants fighting for the Islamic State in Syria have brutally stoned two gay men to death only seconds after they were photographed embracing and 'forgiving' them.

The shocking images were taken in ISIS-held territory in the province of Homs and show the two accused men being savagely executed by up to four jihadis.

Huge, bloodthirsty crowds are seen in the desert clearing where the group of executioners made a display of hugging the blindfolded couple and telling them they were forgiven of their 'sins', before pummeling them to death with hundreds of fist-sized rocks.

Images of the horrific murder emerged on social media this afternoon and were hurriedly shared online by ISIS sympathisers who claim the photographs reveal the terrorists' compassionate side.

The sequence of four images begin by showing two blindfolded men standing side-by-side in a desert clearing while a group of ISIS gather alongside the on motorbikes.

One of the two victims - who has curly hair, a thick beard and wears a black leather biker jacket - appears resigned to his fate as one of his soon-to-killers shoulders rests his hand of his shoulder.

A second shot shows a close-up of the killers embracing the men and apparently forgiving them.

The act appears to be genuine and there is nothing to suggest the victims mistakenly thought they had been pardoned.

Their remarkably calm demeanor is instead likely to have been due to the men having been given a cocktail of medication to reduce their anxiety. ISIS is known to have used similar mind-altering drugs both in filmed executions and when carrying out public amputations. A third image shows a huge crowd of young men and boys gathered in the desert clearing to watch the atrocity take place.

Wearing traditional Arab clothing, the bloodthirsty audience stand in a semi-circle only feet away from the spot where the men will be barbarically murdered.

A number of motorbikes are seen in the background, suggesting that's how many of the onlookers arrived at the execution site.

The final image shows the two victims' battered bodies on the ground as a group of at least four ISIS executioners stand over them, raining down rocks.

News of the shocking murder comes as it emerged that armed forces battling against ISIS over the border in Iraq will finally receive the first batch of F-16 fighter jets it ordered four years ago.

The shipment is expected to boost Iraq's capabilities in battling ISIS in the country. Lt. Gen. Anwar Hama Amin said the fighters would arrive on July 12 along with the U.S.-trained Iraqi pilots and spare parts and would immediately begin carrying out operations, according to a statement posted late Wednesday on the Defense Ministry's web site.