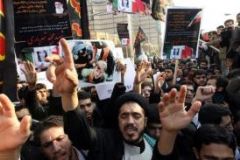 Source: Google
Sattar Beheshti died in police custody after being arrested on charges of "actions against national security on social networks and Facebook."

DUBAI, United Arab Emirates â In his last blog entry, activist Sattar Beheshti wrote that Iranian authorities had given him an ultimatum: Either stop posting his "big mouth" attacks against the ruling system or tell his mother that she will soon be in mourning.

"We will tear down your cruel cage," Beheshti typed on Oct. 29 before signing off.

A day later he was arrested. Within a week, his family had collected his body. They began calls for an investigation that have been echoed by Washington, European allies and rights groups.

Arrests of activists and claims of abuse in detention are commonplace in Iran, but deaths behind bars are much rarer. Iran's judiciary responded to the growing pressure and authorized an investigation. It claims three of Beheshti's interrogators have been arrested while post-mortem reports are studied.

But while the specific circumstances of Beheshti's death may be given a public reckoning, the more far-reaching aspect of the case - Iran's rapidly growing corps of Web watchers - may remain in the shadows, as well as their motives in targeting an obscure blogger whose site was actively followed by more than a few dozen viewers.

The 35-year-old Beheshti apparently fell under the custody of Iran's cyber police, created last year with a wide mandate to crush Web dissent. The powers displayed in the case - including questioning Beheshti outside the regular justice system - suggests a level of autonomy and authority that could bring far more aggressive measures against Web activists.

"There's no question that the Internet is seen by Iran's rulers as a threat and something that needs to be tightly controlled," said Theodore Karasik, a regional security expert at the Dubai-based Institute for Near East and Gulf Military Analysis. "Iran is investing serious resources on this front."

Iran's Supreme Leader Ayatollah Ali Khamenei often refers to the need for stronger measures in the "soft war" playing out in cyberspace with the West and opposition groups. Iran also claims its technicians are working on a self-contained Internet that would somehow give authorities the ability to filter content. The Islamic Republic already tries to block dissident websites and has jailed several well-known bloggers, including Hossein Derakhshan, who helped ignite the Iranian blog boom in 2001 by posting simple instructions to create sites in Farsi. In March 2009, a 29-year-old blogger, Omidreza Mirsayafi, died while being held at Tehran's Evin Prison.

At the time - months before the major crackdowns following the disputed June 2009 presidential elections - Iran's vibrant blogger community was baffled by Mirsayafi's arrest because he was well outside the clique of prominent Web activists. Now, similar questions are being asked about Beheshti and whether Iran's bolstered cyber-police units could be stepping up their surveillance and sweeps. "With the recent declarations about Internet crackdowns in Iran, anyone who puts anything critical on the Web has to be thinking that there is a risk," said Mehrzad Boroujerdi, a Syracuse University professor who follows Iranian affairs. Last month, the U.N.'s Office of the High Commissioner for Human Rights warned of "a further severe clampdown on critical voices" in Iran. Even a former Iranian intelligence minister, Ali Younesi, called Beheshti's death in custody a "disaster" for Iran's leaders. "It takes a long time to repair public opinion and international impact," he said shortly after authorities agreed to open an investigation. It could be weeks before the final report into the death is released.

The coroner's report said the body had "signs of wounds" in five places but no broken bones, the semiofficial Mehr news agency quoted Ejehi as saying. But on Thursday, the Tehran prosecutor's office raised the possibility Beheshti could have died from "excessive psychological stress," suggesting that authorities are looking into causes of death other than abuse for the final report.

Beheshti was on the fringe of the Iranian online opposition. His blog, magalh91.blogspot.de, had fewer than 30 viewers in October. Beheshti contributed to some better-known reformist websites from his home in Robat Karim, a town about 25 miles southwest of Tehran that includes many struggling families who migrated from even poorer provinces.

Beheshti had some run-ins with authorities, opposition websites reported, including being detained in 1999 after student protests at Tehran University. But by 2012 he was just one of hundreds of voices on the Web hitting the same notes: anger over the increasingly heavy hand of Iran's authorities and frustration over the systematic crushing of the pro-reform Green Movement after the 2009 postelection unrest.

As recently as September, Beheshti's blog posts were packed with political outrage, but nothing that would likely bring heat from officials. He chronicled the arrests and court hearings for activists and others. He kept lists of opposition figured behind bars.

In October, however, the tone began to shift. Beheshti began to flirt with the well-known red lines in Iran, including direct criticism of Khamenei and calls for open revolt. It's not known why he began to ramp up his defiance, but it appeared to coincide with heavier pressure from the Web-monitoring forces. "As an Iranian, I hereby request all activists and parties to form a unified movement for a countrywide uprising," he posted Oct. 2. The following day he continued: "The only way to liberation is through civil protests and strikes. Violence is not our aim. We just seek our rights ... You, the rulers of the country, this is the anger of a world-weary nation. You better hear it."

A week later, he wrote an open letter to Khamenei. It accuses him of trying to cover up the depths of the country's economic crisis under Western sanctions seeking to rein in Tehran's nuclear program. "You suppress the protests with club and mace," he posted.

"At the moment, the poor and deprived are rebelling," he wrote Oct. 20. "If they really rise, even the Revolutionary Guard cannot stop them."

And again on Oct. 22, he returned to Khamenei and his control of Iran's judiciary, which he called a "slaughterhouse" for free expression.

"I can call you an artist," Beheshti wrote in reference to Khamenei, "in the art of killing. Believe me, I consider you an artist."

His last post he described alleged threats from authorities to close down the site or face being "shut up with no trace." "They say I talk too much," he joked darkly.

"The Islamic Republic is putting immense pressure on activists and independent Iranians," he added, "telling them they have no rights to express their opinions about the affairs in the country; threatening them in various ways from arrest to torture ... to death in order to intimidate them.

"Don't intimidate us with your threats as there is no fear in our hearts."