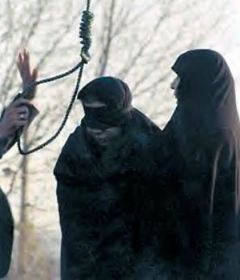 Farzaneh Moradi, A 26 Year Old Woman, Was Hanged for Murdering Husband She Was Forced to Marry at 15

Farzaneh (Razieh) Moradi (26) was hanged in the prison of Isfahan this morning. She was convicted of murdering her husband, to whom she had been married to at the age of 15. Farzaneh's daughter is 10 year old and has not seen her mother since she was arrested six years ago.

Farzaneh Moradi, was convicted of murdering her husband six years ago. At the beginning she confessed to the murder but later she said that it was another man identified as Saeed who had committed the murder. However, the court didn't accept the new explanation and sentenced her to death (qisas, retribution in kind). According to the Iranian law, the only way to save her life was if the family of the offended pardoned her.

Farzaneh was married to her husband Ahmad at the age of 15, and became a mother of a girl when she was only 16. According to several reports Farzaneh was not happy with her marriage. According to her , the man who had committed the murder had promised Farzaneh that they would live together, and told her that if she accepted the responsibility for the murder she would not be executed since she is mother of a little child.

Farzaneh had not seen her daughter since she was arrested six years ago.

Iran Human Rights (IHR) strongly condemns Farzaneh's execution. Referring to the sentence of "qisas" (retribution), Mahmood Amiry-Moghaddam, the spokesperson of IHR said: "Iranian authorities are fully responsible for Farzaneh's execution even if by using the ingumane sentence of qisas, they want to put the responsibility of her execution on the shoulders of the family of the offended. According to the international law, punishment is the responsibility of the state".