U.N. Inaction on Iran
All Actions of the UN Human Rights System Critical of Specific States, 2013 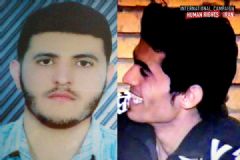 In early 2012, Ahvaz Intelligence Office forces arrested six citizens from Ahvaz's Khalafieh neighborhood, who are currently being held in Ahvaz's Karoon Prison. In June 2012, Branch 2 of Ahvaz Revolutionary Court under Judge Seyed Mohammad Bagher Mousavi sentenced five of them to death on charges of "moharebeh" (enmity with God), "corruption on earth," "acting against national security," and "propaganda against the regime." The sixth, Rahman Asakereh, was sentenced to 20 years in prison. Branch 32 of the Supreme Court upheld the death sentences, and the executions are imminent.

The only evidence in the case of five Arab Iranians sentenced to death and a sixth sentenced to 20 years in prison is based on confessions given under torture, a cousin of two of the accused told the International Campaign for Human Rights in Iran. Kamel Alboshokeh, a cousin of condemned prisoners Jaber and Mokhtar Alboshokeh, said the men were targeted and tortured because of their ethnicity.

"The families request that the death sentences be overturned, because they are innocent, and to hold a fair trial, free from the control of the Intelligence Ministry, and presided by experienced judges in Tehran.... We are sure that under such circumstances the ruling will be overturned. Unfortunately, in southern Iran, there is a lot of extremist thinking and when someone is arrested, they are first punished not for any crimes they may have committed, but they are tortured for being Arab," Kamel Alboshokeh told the Campaign.

He told the Campaign his family had heard from his cousins only once in the last several weeks. "On Sunday, January 27, after ten days without a word about them, they were able to call their families for a few minutes to say that they are still alive and in prison. We know nothing more and we have not heard from them since."

In early 2012, Ahvaz Intelligence Office forces arrested six citizens from Ahvaz's Khalafieh neighborhood, who are currently being held in Ahvaz's Karoon Prison. In June 2012, Branch 2 of Ahvaz Revolutionary Court under Judge Seyed Mohammad Bagher Mousavi sentenced five of them to death on charges of "moharebeh" (enmity with God), "corruption on earth," "acting against national security," and "propaganda against the regime." The sixth, Rahman Asakereh, was sentenced to 20 years in prison. Branch 32 of the Supreme Court upheld the death sentences, and the executions are imminent.

In different statements, various human rights organizations and Catherine Ashton, High Representative of the European Union for Foreign Affairs and Security Policy, have asked Iranian officials to stop the death sentences of these five Arab Iranians.

Kamel Alboshokeh, a student in London, spoke with the Campaign about the six Arab prisoners and their background. "All of them are from the educated population of the region and members of Alhavar, a non-governmental organization. The organization was formed during the Mohammad Khatami era. 'Alhavar' means dialogue, and its name was chosen based on Mohammad Khatami's "Dialogue of the Civilizations" motto. The organization's objective was to promote Arab language and culture, because we are not allowed to speak Arabic in our schools. The organization's activities were solely cultural, and it had programs such as plays, music, and special events during mourning and celebration times. In addition to Arabs, non-Arabs and officials of government offices were also invited to the organization's events. But despite having a license to operate, after the Ahmadinejad cabinet came to power, it was called illegal and was shut down. Mohammad Ali Amouri was the founder of this organization and all the others were its members. They did not commit any violations. After the organization was shut down and I went to London, we did more human rights work [in London]: for example we would share information about the murders, the prisoners, and the pressure. The Intelligence Office didn't approve of this and kept putting them under pressure and the pressure led to Mohammad Ali's escape to Iraq," Kamel Alboshokeh told the Campaign, referring to the intimidation techniques of the Iranian Intelligence Office.

"[Members of Alhavar] were able to have an impact on the people and elect the mayor, members of the City Council, and a Member of Parliament. These were not things the Ahvaz Intelligence Office approved of. Southern Iran is different from the rest of the regions in Iran. There is extremist thinking there; if they arrest someone, they would first torture him for being an Arab. The Intelligence Office wants to create a constant state of fear and intimidation in the region, and by arresting the intellectuals who could affect the people, created this situation," Alboshokeh told the Campaign.

"In December 2008, after severe pressure from the Ahvaz Intelligence Office, Mohammad Ali had to escape from Iran to Iraq, but he was arrested by Iraqi security forces there and was first sentenced to five years in prison. In his third year of imprisonment he was handed to the Iranian authorities. After Mohammad Ali was extradited, all the others [accused in this case] were also arrested within a few days," Alboshokeh added.

When asked about the evidence against the accused, Alboshokeh said, "In their interrogations, they were told that they were [charged with] contact with parties outside the country, with the UK, the US, and Saudi Arabia. They were told that they had carried out armed activities in the city and that they had attacked government employees. But at the time the government employees were shot at in Khuzestan, Mohammad Ali was inside the Iraqi prison and the other two never went to compulsory military service in order to learn how to shoot a gun. Residents of the Khalafieh neighborhood signed a petition confirming that the five men were their neighbors and were cultural folks who had never shot at anyone. They were told that they were members of the 'illegal Alhavar Organization.' But in fact this organization had been issued a license by the Ministry of Culture and Islamic Guidance." Security forces interrogated the men after their arrest and during their detention.

"All of them told their families that in addition to psychological and mental torture, where their ethnicity was insulted and they were called 'alligator-eating Arabs,' 'Arab flies,' and 'donkeys,' and were routinely threatened with murder, they were tortured with belts, electric cables, sticks, gas hoses, and even electric shock. They put Hashem Shabani's feet in boiling water to make him confess. Hadi Rashedi's pelvic bone broke under torture, and Jaber's jaw was dislocated, and Mokhtar's hands have a severe shake now," Alboshokeh said, describing the conditions of the accused.

Asked whether the men have been allowed to have lawyers, Kamel Alboshokeh said, "Five of the six suspects in the case had lawyers. Hashem Shabani was the only one who had a public defender because of financial problems. After the ruling was announced, the lawyers objected, asking how, in the absence of witnesses, evidence, and confessions in the presence of the judge, had the death penalty emerged? One of the lawyers had an argument with the judge during this discussion, and the judge threatened that if the lawyer did not leave the courtroom, he, too would be arrested. We were hoping that later, the sentence would be overturned at the Supreme Court, but that never happened."

While there is no specific date set for the executions, the five men's death sentences may be carried out at any time.