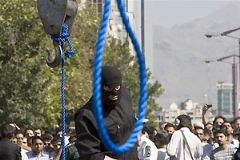 Human rights have not just been abused, but are 'virtually non-existent in President Hassan Rouhani's Iranian regime, the Friends of a Free Iran in the European Parliament have declared.

There have been at least 1,100 executions during his 15 months in office - more than in any similar period in the past 25 years, the group said.

Iran is holds the world record for the highest number of executions per capita and is the biggest executioner of juvenile offenders. Death sentences for ethnic and religious minorities have increased dramatically, it reported.

They said in a statement: "Only last month, the UN General Assembly â for the 61st time â condemned Iran for its flagrant and systematic violation of human rights.

"Despite all of the propaganda by Tehran's apologists, the human rights situation is deteriorating at a faster pace under Rouhani than under his infamous predecessor, Mahmoud Ahmadinejad."

One of those executed was political dissidents Gholamreza Khosravi, who was put to death for a small financial donation to the main opposition group the PMOI (MEK), the Friends of a Free Iran said. They added: "According to the Reporters Without Borders, Iran has become the 'world's leading jailer of female journalists and netizens' under Hassan Rouhani with at least 65 journalists and news providers behind bars.

"It is one of the world's most repressive countries as regards freedom of information. It is one of the largest customers of Internet censoring and filtering equipment and blocks around five million websites dedicated to arts, social issues, and news, and works hard to filter the contents of blogs and social media.

"Mistreatment of women has been at the heart of this theocratic regime. In October, organized gangs affiliated with the clerical establishment committed acid attacks on Iranian women and girls, which led to at least one death, and several blinded and disfigured faces.

"On 25 October, in defiance of international appeals, the Rouhani government hanged Reyhaneh Jabbari, a 26-year-old girl, for defending herself against an intelligence agent who had tried to sexually assault her."

And in November, in the southern city of Jahrom, regime-backed paramilitary Basij forces stabbed a dozen young female students after being incited to do so by the clerical leaders, it added.

Their statement continued: "On the International Day of Human Rights, it is vital that we Europeans pay special attention to these abuses that Iranian have suffered from for over three decades.

"Iranian opposition leader Maryam Rajavi has underscored that the regime has trampled on all 30 articles of the Universal Declaration of Human Rights. She has pointed out during her various speeches in the European Parliament that the horrifying atrocities perpetrated by the Iranian government render illegitimate continued political, diplomatic and trade relations with the ruling dictatorship.

"We agree with her that giving concessions to the mullahs only emboldens them to continue and intensify their atrocities.

"The EU cannot remain silent about the horrific crimes Iran has committed against its people. Nuclear negotiations should not act as a pretext to turn a blind eye to flagrant violations of human rights.

"Tehran has also been the center for the expansion of terrorism and fundamentalism throughout the region, endangering world peace and security. It is time for Europe to show some spine."