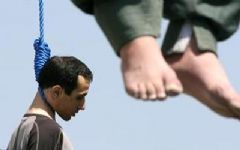 At least 411 prisoners have been executed in Iran from the beginning of January 2014 to the end of June of the same year. This indicates that the execution wave, which recommenced after the most recent Iranian presidential election, is continuing. According to reports by Iran Human Rights (IHR), more than 870 people have been executed since the election of Mr. Hassan Rouhani in June 2013. IHR calls on the international community to take serious measures to stop the execution wave in Iran.

Iran Human Rights, July 7, 2014: One year after the Iranian presidential election of June 2013, and despite improvements in relations between the international community and Iran, a recent report by Iran Human Rights (IHR) shows that the use of the death penalty is higher now than in two decades. According to the latest report by IHR, at least 411 people have been executed in the first six months of 2014, and at least 870 people have been executed during the first year after the presidential elections (between July 1, July 2013 and June 30, 2014). This is an average of more than two executions in Iran every day. Among those executed so far in 2014, there have been at least eight juvenile offenders and six political and civil activists.

IHR calls on the international community to take serious measures to stop the execution wave in Iran. Mahmood Amiry-Moghaddam, the spokesperson of IHR says: "The increase in the number of executions after the Iranian presidential election of June 2013 is dramatic and needs special attention from the international community. We support Ms. Navi Pillay's call to include human rights in the nuclear talks taking place between the 5+1 and Iran." Amiry-Moghaddam added: "The arbitrary executions going on in Iran must have consequences for the Iranian authorities."

In November 2013, World Coalition against the Death Penalty called on the UN and EU to put the death penalty on top of the agenda on Iran talks.

According to IHR's report on the death penalty, in the first half of this year 166 executions have been announced by official Iranian sources while 245 additional executions have been reported by human rights groups and confirmed by several independent sources. 43% of the executions in Iran are reportedly based on murder and 42% of the executions are reportedly due to drug-related charges. At least 8 of those executed in 2014 were juveniles (under 18 the age of 18) at the time of committing the alleged offence.

Last year at least 687 people were executed, according to IHR's 2013 annual report on the death penalty. 68% of these executions took place after the election of Hassan Rouhani.