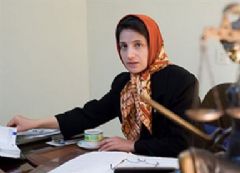 TEHRAN - Iran has arrested prominent human rights lawyer Nasrin Sotoodeh on security charges and she is being held in solitary confinement, her lawyer told AFP on Thursday.

"Ms Sotoodeh has been detained since Saturday after she was summoned over accusations of propaganda against the establishment and conspiring to harm security," Mina Jafari said.

"She called from Evin prison yesterday and said she was in solitary confinement," and that the authorities had also seized personal computers and documents from her home and office. Mother of two Sotoodeh, 45, has defended several offenders on death row for murder under the age of 18 as well as some opposition activists jailed since Iran's post-election unrest.

Iran has cracked down heavily on reformists, journalists and rights activists since the disputed June 2009 re-election of President Mahmoud Ahmadinejad, which sparked mass street protests.

The Islamic republic has faced criticism by international rights bodies over its human rights record and treatment of opposition supporters and dissidents.

Several prominent rights defenders have left Iran over the past year, such as lawyer Mohammad Mostafai, who brought into the spotlight the case of death by stoning convict Sakineh Mohammadi Ashtiani.