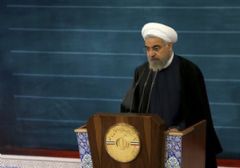 Iranian authorities have escalated their persecution of religious minorities since the election of President Hassan Rouhani despite his promises to grant them more rights, according to the U.S. Commission on International Religious Freedom.

The commission's annual report for 2015 found that an increased number of religious minorities have been jailed under Rouhani, who became president in 2013. He declared that year that, "All ethnicities, all religions, even religious minorities, must feel justice"-comments that led many to perceive him as a more moderate leader. Yet the conditions for believers in Iran have deteriorated since his election, the commission said.

"The government of Iran continues to engage in systematic, ongoing, and egregious violations of religious freedom, including prolonged detention, torture, and executions based primarily or entirely upon the religion of the accused," the commission said in the report's section on Iran.

"Since his June 2013 election, President Hassan Rouhani has not delivered on his campaign promises to strengthen civil liberties for religious minorities," the report added. The religious minorities suffering abuses in Iran include Baha'is, Christian converts, Sunni Muslims, Jews, and Zoroastrians. Some have been sentenced to death and executed for committing "enmity against God" in the Islamic Republic, where Shiite Muslims form a majority.

Iran's largest non-Muslim religious minority, the Baha'i community, has experienced some of the worst repression. Authorities consider the Baha'is to be "heretics" because they believe that all religions have legitimacy, and they are not recognized as a protected religious minority under the Iranian constitution. More than 100 Baha'is were in jail for their beliefs as of February, the report said. They are often denied entrance to universities and frequently have their religious sites and businesses destroyed or closed.

Iran's brutal treatment of religious minorities has elicited sharp criticism from lawmakers on Capitol Hill. Sen. Mark Kirk (R., Ill.), whose state hosts one of only seven Baha'i temples in the world, recently introduced a bipartisan resolution condemning Iran for its repression of the community. A leading advocate of sanctioning the Iranian regime, Kirk has also pressed the Obama administration to expand the financial penalties levied against Tehran for its human rights abuses.

The administration continues to pursue a nuclear deal with Iran that would lift sanctions in exchange for modest restrictions on its nuclear program, though officials say financial restrictions tied to Tehran's support for terrorism and human rights violations would remain in place.

"If the Obama administration wants to be serious about holding Iran accountable, it should be working with Congress to reinforce and expand sanctions that target Iran's ongoing and egregious violations of religious freedom and human rights," Kirk recently told FoxNews.com. "But it's not."

Sen. Marco Rubio (R., Fla.), also recently proposed a bill amendment that would prevent the Obama administration from lifting sanctions on Iran that are linked to its support for terrorism or human rights abuses. However, few amendments were added to the bill, known as the Iran Nuclear Agreement Review Act, in order to secure its passage in the Senate. The legislation permits Congress to pass a resolution of approval or disapproval if President Obama reaches a final nuclear deal with Tehran.

Christians also face severe repression in Iran. As of February, about 90 were either in detention or awaiting trial because of their beliefs. Human rights groups report that Christian prisoners are increasingly beaten in jail, possibly as part of an attempt by authorities to deter Iranians from converting to the faith.

Saeed Abedini, a U.S. pastor, is one of those imprisoned for his Christian faith. Once a participant in Iran's Christian house church movement, he was convicted in 2013 for "threatening the national security of Iran." He has been physically assaulted multiple times while in prison, the commission said.

"In November 2013, he was transferred to the Rajai Shahr Prison, which is known for its harsh and unsanitary conditions," the report said. "In March 2014, prison authorities beat Pastor Abedini after which he was hospitalized for nearly two months to receive treatment for the injuries sustained from the beatings. In May 2014, Pastor Abedini was beaten a second time when he was released from the hospital and returned to prison."

Iran's abuse of religious minorities appears to contradict recent comments by Iranian Foreign Minister Javad Zarif, who claimed that, "We do not jail people for their opinions."