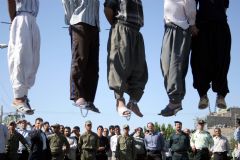 Iran Is Leader of Executions 2016: At Least One Execution A Day

Since January 2016, Iran has executed at least 230 people, that is at least one person a day on average. The number of executions has recently increased and Iran ranks first in the world, followed by China, when it comes to executions per capita. Iran executed approximately 1000 people in 2015.

According to Human Rights Watch, "In 2016, Iran is yet again the regional leader in executions - at least 230 - while it continues to be a laggard in implementing illusory penal code reforms meant to bridge the gap with international standards."

Among these executions is the largest mass execution of its kinds in years, of a religious minority in which at least 20 Sunni inmates were mass executed. Human Rights Watch denounced the mass execution and called it "shameful low point in its human rights record."

The alarming and increasing number of executions in Iran highlight the fact that human rights standards have not improved under the presidency of Hassan Rouhani. Instead the situation has been worsening under the so-called moderate Iranian government, and particularly after the nuclear agreement was reached. If the West and human rights organizations defend liberty and social justice and if they want to be on the right side of the history, they should take serious steps in pressuring Iran to respect human rights through various means.