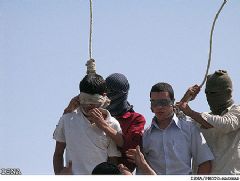 Iran is the world's most prolific executioner of children, Amnesty International said on Tuesday, accusing the Islamic republic of using torture and ill-treatment to extract confessions from minors.

The rights group said Iran "tops the grim global table of executioners of juvenile offenders" with 73 recorded child death sentences between 2005 and 2015, including at least four last year.

"Iran is one of the few countries that continues to execute juvenile offenders in blatant violation of the absolute legal prohibition on the use of the death penalty against people under the age of 18 years at the time of the crime," said Amnesty's Middle East deputy director, Said Boumedouha.

London-based Amnesty said most known child executions in Iran were for murder, rape, drug-related offences and a national security-related offence known as "enmity against God".

It also accused Iran of breaking international law by failing to close a penal loophole allowing a judge to decide that girls as young as nine and boys as young as 15 bear full criminal responsibility - potentially exposing them to capital punishment.

"Instead of introducing half-hearted reforms that fall woefully short, Iran's authorities must accept that what they really need to do is commute the death sentences of all juvenile offenders, and end the use of the death penalty against juvenile offenders in Iran once and for all," Boumedouha said.

Amnesty said that Iran never officially announces when a juvenile is executed. The head of its judiciary, Ayatollah Sadegh Larijani, said in 2014 that "we have no execution of people under the age of 18″.

Tehran this month finalised a landmark deal with world powers over its disputed nuclear programme in an accord many observers say could help end its isolation from the West. But it remains accused of serious rights violations.

Amnesty alleged that Iran was carrying out unfair and improper trials on minors accused of capital offences, including incommunicado detention, solitary confinement and torture.

It documented a "disturbing escalation" in the number of death sentences carried out in Iran last year, with at least 830 people executed between January 1 and November 1, 2015.

Iran is only behind China in the total number of annual executions, the watchdog said.