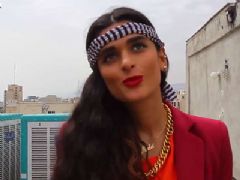 A screenshot from the Iranian 'Happy' video.

Iranian authorities arrested on Monday at least six people who starred in a viral YouTube video that shows them dancing to Pharrell Williams' "Happy," according to multiple reports.

In the video, three men and three women without hijabs are seen dancing to the hit song in an apartment and on a Tehran building rooftop. It went viral in the past few weeks, attracting nearly 200,000 views on YouTube, according to a Facebook post published by the video's art director, Reihane Taravati. No official explanation has been given for the arrests yet, though some believe the content runs afoul of Iranian law.

Negar Mortazavi, an Iranian freelance journalist based in Washington, D.C., told Mashable that she wasn't surprised the six people were arrested. When Mortazavi first saw the video, she thought it was dangerous to upload it online, considering its content. "Not wearing hijabs and dancing, boys and girls together - that's three big red flags," she said.

Iranian state television broadcast a video of the six people in custody on Tuesday, only showing them from behind; it also quotes a police officer who says that they "should try to avoid ... this kind of problems," according to the subtitles of a shortened version of the broadcast uploaded to YouTube.

The original video has since been made private, but copies have been uploaded on YouTube by others who are demanding that the six arrested participants be released. The exact number of people arrested is currently unclear, according to the BBC.

The arrests have sparked outrage online, with thousands tweeting their support, using the hashtag #FreeHappyIranians. Even Williams condemned the arrests on his Facebook profile:

Pharrell Williams
Artist Â· 7,211,507 Likes Â· 17 hrs
Â· It is beyond sad that these kids were arrested for trying to spread happiness

They underline Iran's contradictory relationship with the Internet and freedom of speech. Over the weekend, President Hassan Rouhani repeated his support for looser restrictions online, saying Iranians should "embrace the Internet," according to Reuters.

"We ought to see [the Internet] as an opportunity. We must recognize our citizens' right to connect to the World Wide Web," he said, according to state-run Islamic Republic News Agency.

The arrest may be proof of tensions between hardliners in the Iranian government, who are closer to the Ayatollah Seyed Ali Khamenei, and the more liberal members of Rouhani's cabinet.

Last month, one of the women featured in the video told Iran Wire, an independent English-language website, that the group made it "to tell the world that the Iranian capital is full of lively young people, and change the harsh and rough image that the world sees on the news."