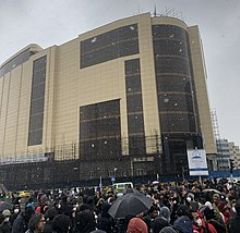 Amnesty International reports that at least 106 people have been killed in 21 cities across Iran during nationwide protests ignited by a sudden hike in fuel prices.

The UK-based human rights organisation added that the actual death toll may be even higher, as unconfirmed reports have put the number as high as 200.

The United Nations also expressed concerns that a "significant" number of people may have been killed in the violent crackdown.

Experts say the numbers make sense, judging by the images that have emerged from the violent crackdown of protests by security forces in multiple cities.

Hosein Ghazian, an Iranian sociologist and pollster based in Washington, said that he trusts Amnesty and expects the death toll to be even higher than what has been reported. "Usually at protests everywhere around the world the actual number of people who get killed is higher than the number that gets verified," Mr Ghazian told The Independent.

Iranian authorities have not yet released a definitive number of people killed or injured in the protests, but some media outlets reported that over 1,000 people have been arrested and over 100 banks have been vandalised.

Access to the internet has been cut off for most Iranians, and only a small number of government and private entities as well as state media outlets have been connected over the past few days.

Government officials have confirmed that access to the internet has been cut off for national security reasons.

Lack of access to the internet has made it difficult for reporters and citizen-journalists to tell the full story of what is happening on the ground in nearly 100 cities across the country.

Nader Hashemi, director of Middle East Studies at the University of Denver, said the figure of 106 killed is a conservative number and he suspects the real figure is much higher.

Human Rights Watch has also warned that Iranian security forces are using "excessive force" against protesters, condemning authorities for "brutally repressing Iranians who are frustrated with an autocratic, abusive government and its policies and who bear the brunt of negative economic consequences of renewed US sanctions".