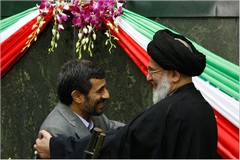 Reporting from Beirut - Nearly a month later, she can't erase images of the dying young man from her mind.

All but two of his upper teeth had been knocked out. His nails had been pulled out. His head had been bashed in. His kidneys had stopped working. But what most disturbed her, she said, were the stitches around his anus -- a sign, the nurses told her, that he had been raped.

Iranian reformist websites and activists in recent days had identified 19-year-old Mohammad K. as one of the protesters arrested during Iran's postelection unrest, locked up in the Kahrizak detention facility and severely beaten.

But the woman, a secretary at a downtown Tehran company who told her story to The Times on condition of anonymity for fear of retribution, said he was also a victim of jailhouse sexual torture. Such accusations are making waves in Iran after the release this week of a letter by a prominent reformist politician.

"Since then I am deeply depressed," said the woman, who was at Loghman hospital visiting a relative when she discovered Mohammad K., whose full name is being withheld because of the sensitivity of the allegation. She helped overworked nurses change his bandages.

"I cannot sleep. I take tranquilizers. I have lost 20 pounds. I cannot eat properly. His toothless face is not erasable," she said.

Iran's parliamentary speaker, Ali Larijani, has promised to investigate allegations of prisoner abuse, including jailhouse rape, which were included in the letter dated July 29 written by the reformist politician, Mehdi Karroubi, to Ayatollah Ali Akbar Hashemi Rafsanjani and leaked to the media. Karroubi was among opposition presidential candidates whose defeat by President Mahmoud Ahmadinejad in the disputed June 12 elections triggered weeks of protests.

The same week that Karroubi wrote the letter, authorities announced they had closed Kahrizak as a "substandard" facility on the orders of Iran's supreme leader, Ayatollah Ali Khamenei. Prosecutor-General Qorban Ali Dori-Najafabadi and Police Chief Gen. Ismail Ahmadi Moghaddam have acknowledged there was abuse of prisoners at the detention center and fired the warden and three guards.

Iran has for decades been accused of torturing detainees. But the release of Karroubi's letter -- which has been widely distributed online and described on foreign-based satellite television channels, though its most explosive allegations were censored from newspaper reports -- has placed the issue of treatment of detainees on the front burner.

"Some of the detainees claim incarcerated girls were raped so harshly until their uteruses were torn apart, while young boys were sexually abused so savagely that they are suffering from serious depression as well as physical and mental traumas," Karroubi wrote. "Those who have been subject to these embarrassing tortures have been threatened with death if they disclose details."

Lawmakers wary of Ahmadinejad's confrontational style and hard-line policies have begun to use the issue to turn up the heat on his allies in the Revolutionary Guard and Basiji militia, whom they believe led the brutal crackdown on detainees.

"The punishments meted out to these individuals must be specified so that the public can be assured that these offenders have been punished," Ali Motahari, a conservative member of parliament often critical of Ahmadinejad, told reporters Monday.

On Tuesday, reformists submitted the names of 69 protesters they said were killed in the weeks of demonstrations, more than double the number acknowledged by the government. Western officials in Tehran estimate that more than 100 died in the violence.

Security officials contend that fewer than 30 died. Saeed Mortazavi, Tehran's hard-line prosecutor, told news agencies that Mohammad K. and Mohsen Ruholamini, the son of a prominent scientist and political advisor, died of a meningitis outbreak at Kahrizak. Brig. Gen. Ahmad Reza Radan, a security official close to Ahmadinejad, has dismissed the charges as "rumors" and "psychological operations" spread by the West.

A friend of Mohammad K.'s family told The Times that the young man's father is a wealthy real estate broker. Reformist websites say the young man was arrested by security forces near Tehran's Vali Asr Square on July 9, a day of protests coinciding with the 10th anniversary of a student uprising. A friend spotted him being hauled away and told his family, whose members began a fruitless weeklong quest to find him.

After Kahrizak, Mohammad K. was moved to Evin Prison, before he was taken to Loghman hospital, said the family friend, who also requested anonymity for the sake of safety.

At the hospital, the secretary -- a supporter of the protest movement -- felt compelled to help empty the comatose man's urine container and change his bandages.

At 9:30 p.m. on July 16, a man described to her by nurses as the acting head of Kahrizak arrived at the hospital along with a group of soldiers and the young man's parents and uncle, who journalists later told The Times is a ranking official in the government.

The parents identified the young man, and the prison official signed a document declaring Mohammad K. "free," the secretary said. Outside, in the hospital courtyard, soldiers sipped fruit juice, she said.

"He is nearly dead and now you declare my son free," the weeping mother said, before taking him by ambulance to the privately owned Mehr hospital, the secretary recalled.

By 3 a.m., Mohammad K. was dead, hours before he was supposed to sit for his university entrance exam.

His father, Ali, publicly disavowed an interview the family gave to the BBC Persian TV channel describing their son as a martyr to the movement opposed to Ahmadinejad.

The family friend said Mohammad K.'s uncle pulled strings to allow for a memorial service, denied to most of the protesters killed in the unrest. On July 23 in Tehran's a-Qadir mosque, the cleric described him as a committed young man who died for his beliefs.

"Death is our inevitable destiny," the cleric told Mohammad K.'s weeping relatives and friends, according to one witness. "But the only death that is awful is . . . death in a society in which people are not allowed to think and explore the horizons of thought."