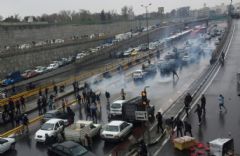 Iran has imposed harsh sentences on 36 residents of a southwestern city who joined the nation's last major wave of anti-government protests in November 2019, according to a knowledgeable source who requested anonymity for fear of retaliation.

Speaking to VOA from Iran on Friday, the source said the 36 protesters from Behbahan in Khuzestan province were handed their sentences by the city's criminal court October 22. The source said the defendants were sentenced to a cumulative total of 109 years in prison and 2,590 lashes, while each individual was fined more than 3 million tomans, equivalent to roughly $700.

A copy of the verdict, provided by the source and verified by VOA Persian, showed the protesters were convicted of disturbing public order, disobeying security agents and vandalizing public property.

The source said the Behbahan court's presiding judge, Rasoul Asadpour, barred defendants and their lawyers from the courtroom for the October 12 trial session, allowing them to submit only a written defense. Prosecutors presented no evidence for many of the charges, the source asserted.

VOA could not independently confirm the circumstances of the trial because it is barred from reporting inside Iran.

There has been no comment from Iranian officials about the cases of the 36 protesters in state media this month.

VOA's source said two of the defendants, Ahmad Hatampour and Maryam Payab, previously had been sentenced to a total of 12 months in prison in a separate trial overseen by a Revolutionary Court in the southwestern city of Mahshar several months ago. The source said the Mahshar court had convicted Hatampour and Payab of spreading anti-government propaganda, and its ruling was upheld on appeal.

"The 36 Behbahan residents only were protesting against inflation and government mismanagement," the source said. The defendants, who remained free on bail, were planning to visit the Behbahan prosecutor's office in the following days to appeal their sentences, the source added.

Iran's government sparked the November 2019 demonstrations in dozens of cities nationwide by ordering a 50% increase in the subsidized price of gasoline, further straining the finances of Iranians facing high unemployment and inflation in a shrinking economy under heavy U.S. sanctions. Iranian security forces killed hundreds of protesters and arrested thousands more in a violent crackdown on the mostly peaceful demonstrations, in which some people also damaged public buildings and businesses.

The Trump administration said the protests represented the worst political crisis for Iran's Islamist rulers since they seized power in the 1979 Islamic Revolution.