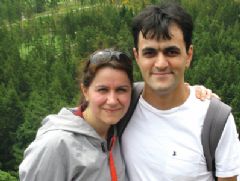 CAIRO: Iran's Supreme Court has upheld the death sentence for website designer Saeed Malekpour. His family said the court confirmed the sentencing after the Revolutionary Guard pressured for him to be executed.

Malekpour, a Canadian resident, was arrested on October 4, 2008, while visiting his family and was sentenced to death last January for "anti-government agitation and insulting Islam," Reporters Without Borders (RSF) said in a statement on Tuesday. "This is horrible and we are going to pressure the Canadian government to do more to intercede on his behalf," a friend close to Malekpour, also a Canadian resident and Iranian, told Bikyamasr.com via telephone.

"Arrests of netizens are meanwhile continuing. Simien Nematollahi, a contributer to the pro-Sufi website Majzooban (www.majzooban.org), was arrested at her Tehran home by intelligence ministry officials on January 11 on a charge of anti-government propaganda. Several members of the website's staff were arrested on September 7 and 8 and were freed on bail on October 4 pending trial," RSF said.

Reporters Without Borders also said it was concerned about Mohammad Reza Pourshajari, a blogger who has been held since September 12, 2010. He was tried by a revolutionary court in Karaj on December 21, 2011 on charges of "insulting the Prophet" in articles posted on his blog and in letters sent to government officials while he was in prison.

His daughter said the trial lasted a quarter of an hour and took place without his lawyer being present. The charge of insulting the Prophet is very vaguely defined but it carries a possible death sentence and is often used by the authorities to silence critics who try to defy the government.

International rights groups, including RSF, have called on Iran to end its arrests, imprisonment and executions of netizens. "Reporters Without Borders wrote to United Nations High Commissioner for Human Rights Navi Pillay on January 10 voicing concern about the situation in Iran and requesting her urgent intercession," the RSF statement added.