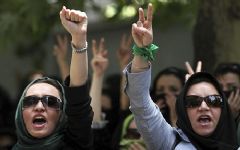 The list of abuses also include the acts of governments who are withholding evidence in cases that include torture of prisoners.

Speaking along with the Special Rapporteurs in the discussion were a large contingent of UN State member nations. But the UN member nation of Iran, a region that continues to imprison those who speak out against human rights abuse including women rights defenders, did not opt-in to join the discussions.

On the same day when human rights defenders were being discussed at UN Geneva, the United Nations in New York, during the conference for the Commission on the Status of Women (CSW), brought the discussion of women rights defenders and personal safety to the table. This year women human rights defenders from Iran are facing ongoing intimidation that continues to prevent them from attending the United Nations conference in New York. Highlighting conditions for women on-the-ground worldwide, over 8,000 attendees are now coming together for the UN conference in New York through March 21. This is the 58th year for the Commission on the Status of Women, a conference that is almost as old as the UN itself.

This treatment of intimidation is a form of human rights abuse, says Special Rapporteur Margaret Sekaggya, in a recent statement made along with other human rights agencies. These intimidations are not new. They have been ongoing for years, say numerous human rights advocates.

"...there were some very disturbing things that happened at the CSW this year. They included moments that could have accelerated to very unsafe conditions for panelists, and for event attendees," said human rights journalist and WNN â Women News Network founder Lys Anzia in a confidential letter to someone connected to high levels at the UN in April 2010 as she witnessed first-hand the harassment of Iranian women delegates who came to attend the UN CSW conference in 2010.

"One of those women delegates was later arrested some months after her return to Iran," said Anzia recently.

Bringing the attention of danger for women rights defenders is an important issue, say advocates. It's an issue that needs the attention of the UN, they continue. "Reprisals have to cease immediately and credible investigations into pending cases of reprisals have to be carried out,' said Special Rapporteur Sekaggya, along with the African Commission on Human and Peoples' Rights and the Inter-American Commission on Human Rights.

The dangers for Iranian women, and other women worldwide, who speak out against injustice is real, experts convey.

In late October 2013 actor and filmmaker Ms. Pegah Ahangarani was sentenced to 18 years in prison for speaking out publicly on human rights issues in Iran. Ahangarani is only one of numerous women rights defenders who have been threatened, sentenced or imprisoned in Iran. "Women human right defenders play a crucial role in the development agenda," said Deputy Foreign Minister of Hans Brattskar of Norway at an UN-held side-event called Women human right defenders â from resolution to solutions during the conference on global women. "Women human rights defenders play a crucial role in the development agenda, as they relate to the most vulnerable and marginalized individuals in society," continued the Deputy Foreign Minister. "We also know that women human rights defenders face particular challenges and difficulties. They are vulnerable to violence and sexual abuse and they experience discrimination because of the historical and structural inequalities in power relations in their societies. Too often, their families and dependents may be directly threatened as well."

In a February 2013 report Mendez highlighted the plight of women in regions where they have been forced to receive medical sterilization against their will, an action that the Special Rapporteur outlines are human rights violations amounting to torture and ill treatment.

"Human rights defenders and their families are often intimidated, harassed, subject to surveillance, threatened, attacked, arbitrarily arrested, criminalized, tortured and ill-treated in detention, subject to enforced disappearances, and sometimes killed," outlined Special Rapporteur Sekaggya during the United Nation discussions in Geneva on Monday March 10. "Both State [national governments] and non-State [non-government] actors are involved in the commission of these acts and I deeply regret to say that impunity tends to prevail in many parts of the world."

Primary responsibility to ensure a safe and enabling environment for human rights defenders lay with States, continued Special Rapporteur Sekaggya during statements made during discussions at UN Geneva on Monday.

In 2012 women rights defenders from Iran were unable to attend the United Nations CSW â Commission on the Status of Women conference due to fear of reprisals from the Iranian government. Today the situation for women who are standing up for human rights in the region has not changed. They are still, in 2014, being intimidated under threats that they will face reprisals by the Iranian government if they try to attend the UN conference on women in New York. The following video made by women in Iran in 2012 who wanted to attend the conference in person was made in efforts to let the world know their plight. But conditions for women human rights defenders have still not changed. "We, a group of women activists in Iran who demand equality, would have liked to attend the fifty-sixth session of the Commission on the Status of Women in the UN. But because of all the threats that the participating women in the previous years have been facing, we decided to talk to you from afar, with the hope that you, on behalf of Iranian women, would defend our rights in the efforts to eliminate all types of gender discriminations and violence against women. We hope that you would encourage the Iranian government, who is a member of CSW, to comply with its international obligations to create gender equality. We also hope that with the pressure of the world's women's movement activists and the follow-up of the UN, Iranian women's activists would be granted a guaranteed safety to attend the next sessions, and therefore, would be able to work with you side by side towards reaching gender equality. But what do Iranian women suffer from in reality?"