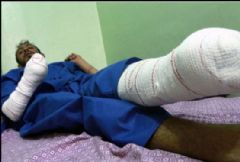 The prisoner, identified as M.R., had his right hand and left foot amputated

Iran Human Rights, August 9 2015: According to official reports, Iranian authorities have carried out another amputation sentence in Mashhad's Vakilabad Prison â this is the second amputation sentence carried out in this prison in one week. According to the Khorasan Razavi Justice Department, a prisoner, identified as M.R., had his right hand and left foot amputated for charges including: Moharebeh (Waging war against God) through participating in eight counts of armed robbery, Destroying government property, Stealing a motorcycle, Physically harming a security agent, Consuming alcohol and illegal drugs, and illegally crossing the country's border. The prisoner's sentence was reportedly issued by Mashhad's Revolutionary Court.