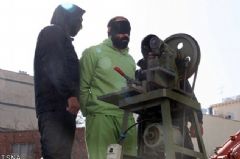 Iranian authorities cut off a man’s hand for stealing

Iranian authorities have amputated one hand of a prisoner who was charged with stealing sheep. The amputation was carried out at Mashhad Central Prison.

According to a report published by Khorasan Newspaper, the sentence was carried out on Wednesday, January 17. The prisoner, named Ali Kh., was arrested for sheep robbery in 2011 when he was 28. The prisoner's hand was amputated by a guillotine, and after the amputation, he was sent to the prison's clinic for medical treatment. The Islamic Penal Code of Iran permits amputation of hands and legs for defendants charged with robbery.

Moreover, based on Article 202 of the Islamic Penal code, if a thief is charged with robbery for the second time after his fingers were amputated, his left foot will be amputated.

According to Khorasan News, the amputation sentence for this prisoner was issued by the "experienced judges of the Appeal Court" who "considered the verdict completely legal considering the solid evidence and proofs".

Iran Human Rights (IHR) condemns physical punishments, considers it against human rights and emphasizes the necessity of a change in Iran's laws to put a stop to these inhumane punishments. IHR emphasises that the amputation of hands for theft are often carried out without the news being announced, and this is only the head of an iceberg.

"Besides being a medieval punishment," Mahmood Amiry-Moghaddam, the spokesperson for IHR, argues "it also demonstrates the extreme hypocrisy in the Iranian Judiciary where a thief is sentenced by cutting off his hand, but there are reports about the head of the same Judiciary's 63 personal bank accounts, filled with public money, which are not even investigated."