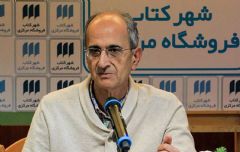 Kavous Seyed-Emami is seen in this undated handout photo

Iranian-Canadian Dies in Custody in Tehran After Crackdown

An Iranian-Canadian university professor detained in Tehran has died in custody, activists and a family member said Sunday, marking the latest suspicious death of a detainee in Iran after a crackdown on dissent following nationwide protests.

They identified the professor as Kavous Seyed-Emami, a 63-year-old professor of sociology at Imam Sadeq University in Tehran and the managing director of the Persian Heritage Wildlife Foundation. His son and the New York-based Center for Human Rights in Iran say that authorities told Seyed-Emami's family that he committed suicide in custody, something they described as suspicious following other detainee deaths.

Tehran prosecutor Abbas Jafari Dolatabadi later confirmed the professor's death on Sunday, saying he had been detained in an alleged espionage ring. The prosecutor on Saturday announced the ring, saying it had targeted people who were "implementing scientific and environmental projects" to collect information on "strategic areas."

"He knew there were a lot of confessions against him and he also confessed himself," Dolatabadi was quoted as saying Sunday by the semi-official ILNA news agency. "Unfortunately, he committed suicide in prison."

The professor's son, musician Ramin Seyed-Emami who performs under the stage name King Raam, wrote on Instagram that his father had died following his arrest on Jan. 24.

"They say he committed suicide. I still can't believe this," he wrote.

Global Affairs Canada, the country's Foreign Ministry, said it was aware of reports of Seyed-Emami's death. An Iranian reformist lawmaker, Mahmoud Sadeghi, tweeted that he failed to get information on Seyed-Emami's death despite calls to "related officials."

"Some of them refused to comment, some others said we pursued (but) failed to get information," the lawmaker wrote.

Authorities arrested nearly 5,000 people in the crackdown that followed, according to Alireza Rahimi, an Iranian lawmaker. At least 25 people were killed in clashes surrounding the demonstrations.

Activists say they have concerns about Iran's prisons and jails being overcrowded and dangerous, pointing to allegations of torture, abuse and deaths that followed the mass arrests during Iran's 2009 Green Movement protests. Since the most-recent protests, activists have said they also remain concerned by reported suicides within Iran's prison system.

Analysts and family members of dual nationals and others detained in Iran have suggested that hard-liners in the Islamic Republic's security agencies use the prisoners as bargaining chips for money or influence. A U.N. panel in September described "an emerging pattern involving the arbitrary deprivation of liberty of dual nationals" in Iran, which Tehran denies.

Iran does not recognize dual nationalities, so those detainees cannot receive consular assistance.

Others with ties to the West detained in Iran include Chinese-American graduate student Xiyue Wang, who was sentenced to 10 years in prison for allegedly "infiltrating" the country while doing doctoral research on Iran's Qajar dynasty. Iranian-Canadian national Abdolrasoul Dorri Esfahani, a member of Iran's 2015 nuclear negotiating team, is believed to be serving a five-year sentence on espionage charges. Nazanin Zaghari-Ratcliffe, a British-Iranian woman, also is serving a five-year prison sentence for allegedly planning the "soft toppling" of Iran's government while traveling with her young daughter.

Iranian-American Robin Shahini was released on bail last year after staging a hunger strike while serving an 18-year prison sentence for "collaboration with a hostile government." Shahini is believed to still be in Iran.

Also in an Iranian prison is Nizar Zakka, a U.S. permanent resident from Lebanon who advocated for internet freedom and has done work for the U.S. government. He was sentenced to 10 years last year on espionage-related charges.

Former FBI agent Robert Levinson, who vanished in Iran in 2007 while on an unauthorized CIA mission, remains missing as well. Iran says that Levinson is not in the country and that it has no further information about him, though his family holds Tehran responsible for his disappearance.