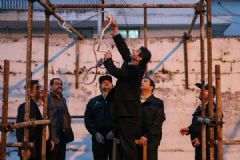 An execution noose is prepared in Iran (File photo)

According to a report from Reuters, the announcement of the sentences was released on Sunday and is part of a larger effort by Tehran to crack down on "financial crimes" and public protest against the regime.

Iranian judicial officials also stated that an additional 32 people were tried and convicted in the Islamic revolutionary courts, and were each given a 20-year prison sentence, Reuters reported.

With U.S. sanctions against Iran about to take effect, Iran's economy has already shown signs of damage. According to Reuters, the country's currency has only 30 percent of the value it had just six months ago.

While the economy continues on a downward path, many in the country are threatening to protest or rebel. Many citizens have demonstrated against perceived economic "corruption, cost of living, and profiteering."

A group of truck drivers has already begun striking over their low wages and the high cost of truck parts. The Iranian regime previously stated that if the truck drivers continue their protests, they will face the wrath of the Iranian justice system.

"Harsh penalties await those who ... block lorry traffic on roads," said Gholamhossein Mohseni Ejei, the spokesman for the Iranian judiciary, according to Reuters.

The Iranian government considers the impending sanctions a tactic in an "economic war" against the Gulf State. According to Reuters, Iran's supreme leader Ayatollah Ali Khamenei promised "swift and just" action against his country's economic enemies.