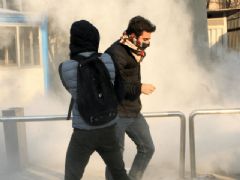 Iranians protesting while being tear gassed

Iranian Supreme Leader Ayatollah Ali Khamenei blamed Iran's "enemies" on Tuesday for stirring up unrest in the country, as the death toll from days of anti-government protests climbed to 21.

In his first remarks since the demonstrations erupted last Thursday, Khamenei accused the nation's enemies of "joining forces" and blamed them for the protests that have turned violent.

Nine people were killed on Monday, including seven protesters, state media reports, taking the toll to 21.

- 450 people have been arrested in the past three days.

- Trump called the Iranian government "brutal and corrupt" in a second tweet Tuesday.

Authorities have restricted the apps Instagram and Telegram but users are accessing them with VPNs.

The protests have become the biggest challenge to the Iranian government's authority since mass demonstrations in 2009. Around 450 people have been arrested over the past three days, according to state media.

The rallies began Thursday over the country's stagnant economy and rising living costs, but they developed into a broader outcry against the government and intensified over the weekend. Many of the protesters are young Iranians tired of the lack of economic opportunity in the country.

Of the nine people killed Monday, seven were protesters. Six of them died in the central city of Qahdarijan when demonstrators stormed a police station and attempted to take guns from authorities, state media reported. The seventh protester was killed in nearby Khomaini Shahr.

A policeman died in Najafabad after a protester shot at officers with a hunting rifle, according to state media. Three other officers were wounded. A member of the Basij, a pro-government militia, was also killed, in south Tehran.

Video images shared on social media from the central city of Tuyserkan on Sunday showed protesters throwing chairs, tables and other objects in reach at riot police, forcing the outnumbered officers to retreat. Six protesters were shot dead in the unrest there, according to the semi-official Fars news agency.

A man and his young son also died on Sunday when a fire truck hijacked by protesters ran them down on a street in western Iran's Dorud, according to the semi-official ISNA news agency. Twelve people were killed over the weekend.

Iranian President Hassan Rouhani tried to downplay the significance of the protests, which have spread beyond the capital of Tehran to at least 18 cities, claiming that "This is nothing" compared to other outbreaks of unrest.

But authorities have nonetheless responded with mass arrests and by restricting the use of the social media apps Instagram and Telegram, used to organize the rallies.

There are now concerns that some protesters could face the death penalty. Musa Ghazanfarabadi, the head of Iran's Revolutionary Court, said Tuesday that some protest ringleaders could be charged with "muharabeh" -- taking up arms against the state -- and accused them of being connected with foreign intelligence agencies, the semi-official Tasnim news reports. The crime carries a maximum sentence of death.

Trump has repeatedly tweeted his support for the protesters in the past week, criticizing the Iranian government as repressive, "brutal and corrupt."

"The people of Iran are finally acting against the brutal and corrupt Iranian regime. All of the money that President Obama so foolishly gave them went into terrorism and into their 'pockets.' The people have little food, big inflation and no human rights. The US is watching!" he wrote on Tuesday.

Rouhani slammed Trump for a similar tweet Monday in which the US leader said the Iranian people were "repressed" and that it was "TIME FOR CHANGE!"

"Based on our analyses, around 27% of the new hashtags against Iran are generated by the Saudi government," Shamkhani said, according to state-run Press TV.

The UK has called on Iran to engage in a "meaningful debate" on the issues raised by protesters, Prime Minister Theresa May's spokesman said Tuesday.