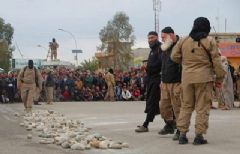 ISIS abuses then stones teenage girls to death for “adultery”

The two men they were with identified by the Sharia Court as Abu Zubair al-Idlbi and Maher Hameed, escaped with 50 lashes in a public flogging.

The IS-led Sharia Court released a statement claiming the girls were seized in a house "with two strangers" - an act strictly forbidden under Islamic State's twisted interpretation of Islam. "The victims were accused of committing adultery with two older men, identified by the Sharia Court as Abu Zubair al-Idlbi and Maher Hameed," the source reported.

Local media activist Ahmed Ramadan told ARA News: "The execution took place in the Hamidiya district of Deir ez-Zor on Tuesday afternoon, where hundreds of people gathered to witness the stoning of the two young girls. The decision of the Sharia Court raised the anger of Deir ez-Zor's residents, who considered it unfair to kill the two girls by stoning and merely flog the men and set them free."

A fortnight ago, four women were raped by Isis (IS) fighters and then stoned to death for 'committing adultery'. The victims were arrested even though Isis militants are said to have caught them being abused during a raid in the city of Mosul. They were brought before a sharia court which ordered them to be publicly executed without giving any details about their alleged abusers.