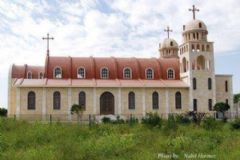 ISIS bombed the Assyrian church in Tel Nasri at 9 AM on Easter morning.

ISIS insurgents blew up a church on Easter Sunday, according to Syrian state news agency SANA.

The militants reportedly planted explosives inside the 80-year-old Church of the Virgin Mary in Tel Nasri in Syria's northeastern province of Hassakain.

Christian and Kurdish militia fighters have been battling the ISIS insurgency in the area but hardline Islamists control the village, SANA said. No casualties were reported.

The militant group, which has seized swathes of Syria and Iraq, espouses a fiercely purist school of Sunni Islam, deeming many other Muslims to be heretics. Its fighters have also destroyed Shiite and Sufi religious sites. Most recently, video released last Friday appeared to show ISIS destroying an archaeological site at the ancient Iraqi city of Hatra.