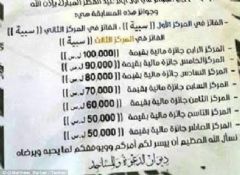 The photograph of an ISIS advert, believed to come from the northern Syrian state of Hasakah

The barbarous jihadis of the so-called Islamic State have reportedly held a Koran memorizing competition in which the top prizes include a Yazidi sex slave.

The photograph of an ISIS advert, believed to come from the northern Syrian state of Hasakah, re-named by ISIS as Barakah recently emerged on social media.

As well as sex slaves, the advert promises cash rewards for fourth and fifth prize. The competition is set to be held in several ISIS mosques in Syria, including the Osama bin Laden mosque.

The seven days competition is set to finish on 27 June and is being held to celebrate the Muslim festival of Ramadan.

The advert addresses ISIS militants in the Syrian province, congratulating the jihadis in their fight and wishing them a blessed Ramadan.

It states that 'the Islamic Mosques office announces the start of al Quran memorizing competition.'

It gives details about the selected surahs which participates are asked to repeatedly learn and commit to memory in order to win a prize.

The shocking competition is being held at several mosques, including the Osama bin ladin Mosque and the Abu Musab al Zarqawi mosque.

The top two prizes are described as a sabieah, the Arabic word for a female servant, who was originally taken after war from her home as a victory sign.

Women from the Yazidi tribe, a religious minority group, have frequently been reported as suffering horrendous abuse at the hands of their ISIS captives.