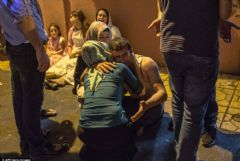 Wedding survivors comforting one another

At least 50 people have been been killed and nearly 100 injured after a child suicide bomber ripped through a wedding party in Turkey.

Turkish president Tayyip Erdogan said it was likely that ISIS was behind the attack which saw the bomber, a boy, thought to be aged between 12 and 14, detonate his explosives among people dancing in the street at a party in the city of Gaziantep last night.

The pro-Kurdish Peoples' Democratic Party, or HDP, said in a statement that the wedding was for one of its members, and women and children had been among those killed.

While another added: 'It was carried out like an atrocity.

'We want to end these massacres. We are in pain, especially the women and children.'

Erdogan said in a statement that there was 'no difference' between the group of US-based preacher Fethullah Gulen who he blames for the failed coup bid, the outlawed Kurdistan Workers Party (PKK) 'and Daesh (ISIS), the likely perpetrator of the attack in Gaziantep'.

'Our country and our nation have again only one message to those who attack us - you will not succeed!' he said.

'The aim of terror is to scare the people but we will not allow this,' said Deputy Prime Mehmet Simsek, who also represents Gaziantep in the Turkish parliament.