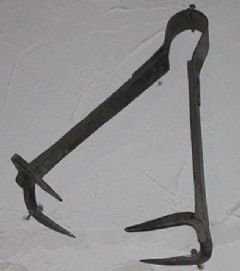 A torture device believed to be similar to the "biter"

ISIS’s Abhorrent Punishment For Women Who Breastfeed In Public

A young mother has been savagely mutilated by ISIS â for breastfeeding in public.

Islamic State (ISIS) has a record of treating women appallingly. But a new report has revealed just how barbaric its regime can be.

Explainer: What is sharia law?

Disturbingly, they have recently been using a spiked, metal device known as "The Biter" to inflict harsh punishments on local women deemed to have shown too much skin - and women who breastfeed in public are not exempt.

Recently, one 24-year-old woman in the ISIS stronghold of Raqqa, Syria was recently accosted by the Al-Khansa brigade for breastfeeding her baby in public.

"[T]hey took me to the 'Hesba' headquarters in the city, and escorted me to the torture chamber, then they asked me to choose between a whip or a 'biter'," the woman told anti-ISIS group A-Raqqa is Being Slaughtered Silently.

"I did not know what a 'biter' was and I thought it is a reduced sentence," she added. "I was afraid of whipping, so I choose the 'biter.'"

"They brought a sharp object that has a lot of teeth and held me, placing it on my chest and pressing it strongly," the young woman, nicknamed Batol to protect her identity, said.

"I screamed from pain and I was badly injured. They later took me to the hospital... I felt then that my femininity has been destroyed completely."

A member of A-Raqqa is Being Slaughtered Silently, nicknamed Abu Ibrahim a-Raqawi to protect her identity, told Syria Direct that rural women in Syria wereparticularly used to breastfeeding in public, making them vulnerable to the horrific punishment.

Batol confirmed that other Syrian woman had fallen victim to the biter, too.

I was not the only one that was tortured with this instrument," she told A-Raqqa is Being Slaughtered Silently . "There were a lot of women in the headquarters and their situation was tragic."

The device "resembles the type of animal trap that closes on an animal's legs when he touches it," Ms Ibrahim a-Raqawi explained to Syria Direct. "The biter is like a jaw, when you press on it sharp teeth emerge."

The horrific torture instrument is similar to the Spider, also known as the Spanish Spider due to its use during the Spanish Inquisition for the crimes of adultery and abortion. It has spikes or "teeth" on the end, and was used in the Middle Ages to shred or rip off the breasts of women accused of various 'crimes'.

In medieval times, the brutal punishment often resulted in the woman's death.

Ms Ibrahim a-Raqawi told Syria Direct that women used to "wear normal clothing, casual clothing" and enjoy "mixed-gender cafes and weddings", but that under ISIS's rule, women in Raqqa - which was captured by the radical group in 2013 and became its headquarters soon thereafter - all women must now wear the niqab outside.

Women inside the city are also not allowed to drive cars or carry weapons, with the exception of women in the Al-Khansa brigade.