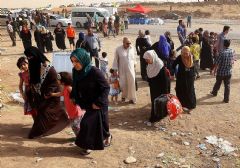 Tucked away in a recent New York Times story on military operations against ISIS by Iraqi special forces and the Kurdish Peshmerga was a brief description of what these troops discovered when they entered a village in Iraq that had been occupied by ISIS fighters. A naked woman, tied to a tree, who had been repeatedly raped by ISIS fighters. Another woman was discovered in a second village, similarly naked, tied down and repeatedly raped. The fighters, it appears, are "rewarded" by being allowed to have their way with captured women.

ISIS has received considerable world attention for its savage beheadings, executions of captured soldiers and men in conquered towns and villages, violence against Christians and Shiites, and the destruction of non-Sunni shrines and places of worship. But its barbarity against women has been treated as a side issue. Arab and Muslim governments, vocal on the threat ISIS poses to regional stability, have been virtually silent on ISIS's systemic degradation, abuse, and humiliation of women. To the men of ISIS, women are an inferior race, to be enjoyed for sex and be discarded, or to be sold off as slaves.

From ISIS-captured territory in Syria, we saw a photograph of a line of women, covered from head to toe and tied to one another by a rope, as they were being led to a makeshift slave market. Little girls, who were going to school and playing with dolls before ISIS fighters arrived at their doorstep, were married off to men many times their age. ISIS set up marriage bureaus in captured Syrian towns to recruit virgins and widows to marry fighters, and also called on fellow jihadists in other countries to recruit brides for the fighters and send them to Syria. It is hardly likely that these "marriages" were based on consent, as is required in Islam. Where women are concerned, consent does not appear to exist in the lexicon of ISIS fighters.

When ISIS moved into Iraq, a similar set of atrocities followed. In ISIS-conquered towns, reports of women and girls having to undergo female genital mutilation spread like wildfire, until denied by ISIS's savvy social media. Iraqi NGOs reported that scores of women of the Yezidi sect-an amalgam of Zoroastrianism and Islam-were taken captive. The older women were sold off as slaves and the young ones were kept as brides for the ISIS fighters. The nature of these forced marriages remains obscure.

Zakia Hakki, an Iraqi judge and a woman herself, says that the fighters leave behind pregnant women who, as "soiled goods," are ostracized by their own societies, while their children are treated as illegitimate. These raped women become targets for honor killings in their own families and communities. The governments of Iraq and Syria have also failed to protect these women and give them any assistance; nor have Western NGOs been effective in looking after these abandoned women and children. ISIS's men not only leave behind dead bodies in their wake but also women and children who are scarred for life.

In its propaganda, ISIS emphasizes women's modesty and piety. It created the al-Khansaa female brigade to protect the morality of women and to ensure they appear totally veiled in public. The irony will not be lost on anyone.

Volunteer fighters from around the world, including from Western countries, who have joined ISIS are complicit in these crimes against women. These young men who grew up in Western cultures seem to have absorbed nothing regarding the value of human life and respect for women. Why are there are no demonstrations in Western and Muslim societies against this barbaric onslaught on women and girls? How much longer will the Muslim and Arab world watch these horrors against women and children before speaking out and acting forcefully to protect them and rid the region of the ISIS calamity?