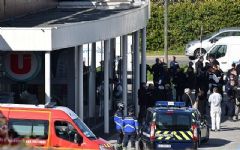 French security and police gather outside the Super U supermarket in the town of Trebes, southern France, where a terrorist took hostages and killed at least two before he was killed by security forces

"The person who carried out the attack in Trebes in southern France is a soldier of the Islamic State and he carried out the operation in response to a call to target states" of the anti-IS international coalition, the Amaq agency said in a statement on social messaging app Telegram.

At least three people were killed in a shooting spree and hostage siege in southern France, after a terrorist carried out three separate attacks in the medieval town of Carcassonne and nearby Trebes.

The assailant was known to police but was not considered a terror threat, Interior Minister Gerard Collomb said.

Collomb named the attacker, who was killed by police, as 26-year-old Redouane Lakdim and described him as a small-time drug dealer.

"He was known by the police for petty crimes, we had monitored him and did not think he had been radicalized," Collomb said after arriving at the scene of the hostage-taking in the town of Trebes, near Carcassonne.

"He was already under surveillance when he suddenly decided to act," he said.

Security sources had said the terrorist was believed to be a Moroccan who was on a watch list of suspected Islamic extremists, but Collomb did not confirm his nationality.

Witnesses said Lakdim shouted "Allahu Akbar" (God is greatest) at a supermarket in Trebes, where he took several people hostage after opening fire on passengers in a car and a police officer in nearby Carcassonne.

He eventually let the hostages go after a policeman offered to take their place.

Security forces stormed the store after he shot the officer who was seriously wounded, Collomb said.