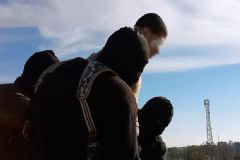 A man before being thrown off building by ISIS (Daily Mail)

Undercover male-only squads formed by Islamic State flagged up blokes who reacted favourably to their come-ons.

The honey trap tactic was used by special brigades of young fighters in the Hisbah religious police.

Sodomy is considered a crime under Isis' Sharia law and is punishable by death â usually barbaric summary execution.

The terror network set up the ploy in a bid to eradicate all gay men from their lands in Syria, Iraq and Libya.

Dozens of men have been killed for being gay by the Isis regime.

Graphic propaganda pictures of the Medieval-style murders have been distributed on at least four separate times since the turn of the year.

Dissident groups have revealed the underhand ploy that is sealing the fates of gay men under Isis control.

An undercover jihadi poses as a homosexual, makes contact with another man and sets up a meeting.

When the pair make contact the unwitting target is immediately arrested.

A member of the anti-Isis resistance said: "They set up dates to coax them into being arrested and executed.

"Homosexuality is viewed as the most disgusting practice by the regime.

"Jihadists have been seeking to entrap gay guys in sting operations.

"Sometimes the men are lucky if they have money and can pay a ransom but often they are taken straight to their deaths."

One accused of being gay was thrown from a two-storey building and then stoned.

And other three were made to kneel in a courtyard and shot in the back of the head with pistols by two masked executioners in Libya.