U.N. Inaction on Kenya
All Actions of the UN Human Rights System Critical of Specific States, 2008 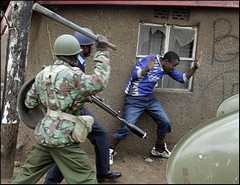 "Police battled thousands of opposition supporters across Kenya who charge President Mwai Kibaki stole his way to re-election. The violence started in the days following the election and Kibaki's defeated opposition challenger Raila Odinga accused Kibaki of tampering with the tallying process."
Source: The Washington Post

"A mob of men wielding sticks, spears and machetes set ablaze a church where villagers had sought refuge from Kenya's post-election violence, burning to death at least 35 people, including women and children, according to aid workers and a priest.

"It is hard to tell the number," said a Kenyan Red Cross official in Eldoret, where the attack took place. "Some people have been burned beyond recognition."

The church stood just outside the volatile city in western Kenya, which has been swept by ethnically charged attacks since Thursday's disputed election. President Mwai Kibaki was declared the winner of a second term Sunday after a vote that opposition candidate Raila Odinga says was rigged and European Union observers said Tuesday was seriously flawed.

According to the priest, who asked that his name not be used for fear of retaliation, at least 200 villagers fled to the Kenya Assemblies of God church Monday night to avoid roving gangs that appeared to be targeting Kibaki's ethnic group, the Kikuyu. Gang members had been setting up roadblocks and checking identification cards, which often indicate tribal affiliation.

"They surrounded the church," the priest said. "I just saw from a distance. People were just watching helplessly, because if there was any movement, you were risking your life." He said he had tried to help, but could not get close enough.

According to aid workers, at least 10,000 people have essentially gone into hiding in the Eldoret area, holed up in schools, churches, police stations and the local airport, awaiting evacuation.

The church burning was part of a wave of violence generally pitting Kikuyus, who have dominated Kenyan politics since the country won independence from Britain in 1963, against Odinga's ethnic group, the Luo, and other tribes who sided with him to oust what they consider entrenched Kikuyu power.

Although the groups have lived together largely without incident for years, Luos in some Kikuyu-dominated areas say they have been targeted with violence and told to leave. In areas where Kikuyus are not dominant, such as Eldoret, many Kikuyus say they are being driven out.

The violence has caused dismay across Kenya, an East African country that has been a model of economic and democratic development since 2002, when Kibaki defeated the chosen successor to Daniel arap Moi, who ruled Kenya repressively for 24 years.

It is a place where most people are poor and rural, but where a growing middle class of urban professionals has enjoyed unprecedented prosperity in places such as Nairobi, the capital, where condos are going up and well-dressed Kenyans fill swanky bars on weekends.

Non-Kikuyu people often feel that this sort of prosperity has benefited mainly the Kikuyus, who voted overwhelmingly to return Kibaki to power. The elections centered on the idea that Odinga would end tribal favoritism and spread the country's wealth more equitably.

After a campaign that was the most open and competitive in Kenyan history, voters flocked to the polls in record numbers, only to see the process degenerate as tallying began amid charges of rigging. People now say they fear the country is slipping back into the condition of a police state, or worse.

Eldoret, about 160 miles northwest of Nairobi, is considered the homeland of the Kalenjin tribe, which has tended to support Odinga. During the 1990s, it was the scene of ethnic clashes that killed hundreds of Kikuyus and displaced thousands more.

On Tuesday, police appeared to have lost control beyond the city center, according to residents. "People are just in escape mode," said John Mburu, a lawyer and a Kikuyu whose grandmother is among those hiding in a rural school with little food or water. "They are trying to get out."

Mburu was at a Nairobi airport Tuesday night, along with a dozen or so families, frantically arranging flights to evacuate relatives. "We've been taking it lightly -- that these are just threats," he said. "They are not just threats."

Riots, protests and ethnic clashes have erupted sporadically around the country over the past several days, only to lose energy, then burst out again. At least 250 people have been killed, according to unofficial counts.

Despite the church burning, Nairobi and other recent trouble spots in Kenya were quieter Tuesday. The capital's downtown was thronged with security forces in fatigues, and roads were blocked. The volatile slums that are Odinga strongholds were being patrolled by water cannon trucks and helicopters, and security forces have not hesitated to beat or shoot anyone who confronts them.

Hundreds of thousands of people remain hemmed in with dwindling supplies of food, unable to express their frustration in lawful protests. Odinga has called for a million-person march in downtown Nairobi on Thursday, but the police have forbidden it. Meanwhile, U.S. and British diplomats were urging Kibaki and Odinga to reach some sort of political settlement.

The party led by Odinga, who fought Moi for years and was jailed for advocating multiparty democracy, won the largest share of seats in parliament, sweeping out even Kibaki's vice president. Odinga has refused to meet with Kibaki unless the president concedes defeat.

A report by the largest team of international election observers concluded Tuesday that Kenya's vote was "marred by a lack of transparency" and included "verifiable irregularities" in the tallying process. The E.U. mission's report said the problems raised doubts about the accuracy of the final results.

In one constituency, an election officer said he was "too tired" to finish counting the votes and shut the tallying center, according to Alexander Graf Lambsdorff, chief of the E.U. mission.

In eight other constituencies, election officials refused to show European observers their tallies. The bulk of the problems occurred in Kibaki's home province, the report said.

Lambsdorff said that so far, there were about 48,000 questionable votes in a contest that came down to a difference of about 200,000 votes. "The problem is with the number of tallying stations we could not observe," he said. "So we cannot verify if those numbers were reported correctly."