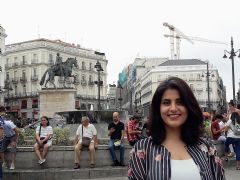 One of Saudi Arabia's most prominent women's rights activists was sentenced to five years and eight months in prison Monday despite international pressure for her to be released, according to a member of her family.

Loujain al-Hathloul's sentence had been suspended for two years and ten months, her sister Lina al-Hathloul said on Twitter. When added to the time she has already served in detention since her arrest in May 2018, she may be released in two months, according to her sister.

Lina Al-Hathloul tweeted that her sister was also subject to a five-year travel ban and that the public prosecutor and Al-Hathloul could both still appeal. NBC News could not independently verify all the details of Al-Hathloul's sentencing.

A spokesperson for Saudi Arabia's Ministry of Media confirmed Al-Hathloul's sentence was for five years and eight months, two years and 10 months of which had been suspended, but could not immediately confirm if the sentence would be backdated to May 2018.

Loujain Al-Hathloul, 31, rose to prominence for openly calling for women to be given the right to drive and for an end to Saudi Arabia's restrictive male guardianship system that had long limited women's freedom of movement. She was arrested along with several other female activists in May 2018, just weeks before the kingdom ended a decades-long ban on women driving.

Rights groups including Amnesty International and Human Rights Watch said that some of the women detained, including Al-Hathloul, reported having faced abuses while imprisoned, including electric shocks, whippings and sexual assault. Saudi Arabia has denied the allegations.

Human Rights Watch said prosecutors charged Al-Hathloul in 2019 with offenses related to her human rights advocacy, before later amending her charge sheet and transferring her case in late November to the country's notorious Specialized Criminal Court, which specializes in handling terrorism cases.

Other dissidents, including cleric Salman al-Awda, who called on the country's rulers to be more responsive to the population's desires for reform, have also stood trial in the kingdom's anti-terror court.

Al-Hathloul amended charges remain entirely related to her human rights work and include sharing information on Saudi women's rights with journalists based in the country, Saudi activists abroad, international bodies and human rights organizations, according to Human Rights Watch.

Convicting Al-Hathloul between Christmas and New Year shows Saudi Arabia wants to minimize the attention her conviction gets, because they are embarrassed over how they treated her and should be, said Adam Coogle, a deputy director with the Middle East and North Africa division at Human Rights Watch.

"This was always a total charade and travesty of justice," he tweeted.

Since Crown Prince Mohammed bin Salman assumed power in 2017 he has presented himself as a reformer eager to transform the deeply conservative society. But he has also presided over sweeping crackdowns on dissent, arresting intellectuals, clerics, women's rights activists and members of the royal family.