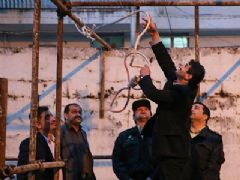 Iranians prepare for an execution in the northern city of Nowshahr on April 15, 2014

More Than Two Executions Everyday in 2014 in Iran

According to official and unofficial reports at least 320 prisoners have been executed in the first 5 months of 2014 in Iran. This makes an average of more than two executions everyday. Iran Human Rights urges the international community to react.

Iran Human Rights, June 3, 2014: One prisoner was hanged in the prison of Semnan (Northern Iran) on June 1, reported the official website of the Iranian Judiciary in Semnan.

The prisoner who was identified as "J. L." (39 year old from Zabol), was charged with possession and trafficking of 1750 grams of the narcotic substance crack, said the report.

According to the reports collected by Iran Human Rights (IHR), at least 320 prisoners have been executed in 2014 in Iran. Iranian official sources have announced at least 147 executions in the period between 1. January and 1. June 2014. In addition, more than 180 executions have been reported by human rights groups and not announced by the official sources. Based on these numbers, the Iranian authorities have executed in average, more than 2 people every day in the first five months of 2014. This is despite the fact that there has been a 3 week's halt in the executions around the Iranian new year in March.

IHR urges the international community to react to the execution wave in Iran. Mahmood Amiry-Moghaddam, the spokesperson of IHR, said: Iranian authorities have once again broken their own records with regards to the extensive use of the death penalty. The United Nations and the international community must take serious measures to stop the unprecedented wave of the executions in Iran."

According to IHR's annual report on the death penalty at least 687 prisoners were executed in 2013, which was the highest number of reported executions in more than 15 years. It seems that the execution wave that started after the presidential elections of 2013 is increasing even more in 2014.