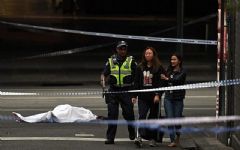 The scene following the terror attack in Melbourne

One dead, two injured in terrorist stabbing in Melbourne, Australia

Australian police on Friday said they were treating a deadly knife attack in Melbourne as an act of terror, adding that the suspect was originally from Somalia and was known to intelligence authorities.

"We are now treating this as a terrorism event," said Victoria Police Chief Commissioner Graham Ashton, adding that the suspect is "someone that is known to us" and had been travelling in a 4Ã4 packed with gas bottles.

The knife-wielding attacker killed one person and injured two others in a rush hour stabbing rampage in downtown Melbourne Friday, before being shot and captured by police.

Witnesses said the man began attacking pedestrians near a pickup truck apparently belonging to the attacker which had exploded into flames.

Australian police said one person died at the scene and another two others were being treated for their injuries.

The suspect was was hospitalized in critical condition.

Media showed video footage of police then trying to restrain a large man in a dark tunic who was lunging, slashing and stabbing wildly at two officers as a pick-up truck burned nearby.

The officers were seen trying for at least a minute to detain the man peaceably as his attacks on them continued, before one office shot him with a weapon.

Police warned people to avoid the area and dispatched the bomb squad to secure the area and examine the burning car.

Officers said they "are not looking for anyone further at this early stage."

"The exact circumstances are yet to be determined. The area has been cordoned off," police said.