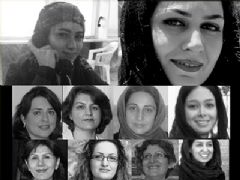 Release Shafipour, Hedayat, and All Other Women Prisoners of Conscience

As the world prepares to honor and promote the economic, political, and social achievements of women on International Women's Day, Iran has sentenced yet another young woman, Maryam Shafipour, for her peaceful activities.

The Iranian Judiciary should release student activists Shafipour and Bahareh Hedayat, along with the eight other women held in Tehran's Evin Prison's political prisoners' ward Nesvan, the International Campaign for Human Rights in Iran said today.

"There is no justification for these young women to languish in prison for precisely the kind of positive engagement that International Women's Day is meant to promote," said Hadi Ghaemi, executive director of the Campaign.

A student activist and member of Mehdi Karroubi's 2009 election campaign, Maryam Shafipour was arrested on July 27, 2013. On March 1, the Tehran Revolutionary Court sentenced her to seven years' imprisonment and two years' ban on "cyberspace, media, and press activities." Hedayat, a student and women's rights activist, has been serving a nine-year prison term since December 2009.

Maryam Shafipour's recent sentencing for the political charges of "propaganda against the regime" and "assembly and collusion against national security" included an unheard of ban on participating in cyberspace, a dangerous precedent for political activists and dissidents in Iran.

Security forces arrested Shafipour on July 27, 2013, after she answered a summons to Evin Prison Court. They then transferred her to Evin Prison, where she spent 67 days in solitary confinement and nearly eight months in "temporary detention" while her case judge refused to release her on bail.

During the trial, "Examples of 'propaganda against the regime' have been provided as her publishing content in cyberspace through Facebook and 'portrayal of a dark image' of the Islamic Republic.

What this means is that whoever writes any critical messages on Facebook can be accused of this 'crime,'" a source close to her family told the Campaign.

Maryam Shafipour is a former student of Agricultural Engineering at Qazvin International University. She was first suspended from education for two terms and later dismissed from the university due to her student activities. In 2010, a Qazvin Revolutionary Court had sentenced her to one year in prison for her student activities, which had been suspended.

Bahareh Hedayat, now 32, is a former member of the Central Council and the Spokesperson for the nationwide student organization Daftar-e Tahkim-e Vahdat. A Tehran court sentenced her to a total of nine years and six months in prison, comprised of two years for "insulting the Supreme Leader," six months for "insulting the President," and five years for "acting against national security and publishing falsehoods." She was also sentenced to an additional two years in prison for "acting against national security through holding a protest gathering for women" on June 12, 2006, currently suspended.

"Releasing all these women would be a much more fitting way to mark March 8 than continuing to sentence and imprison women activists for peaceful exercise of their rights," Ghaemi said.