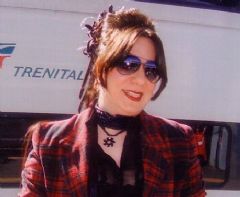 Roya Saberinejad Nobakht, a British citizen, was sentenced to 20 years in prison for comments she made on Facebook about the Iranian government. She was arrested, with her husband, while on a trip to Iran to visit family and friends. There are reports that she has been forced to confess.

Roya Saberinejad Nobakht, an Iranian-born British citizen, is being held in the Women's Ward at Evin Prison for postings on Facebook. In October 2013, she travelled to Iran to visit relatives but was arrested upon her arrival at Shiraz airport.

She was sentenced to 20 years in prison by Branch 28 of the Revolutionary Court presided over by Judge Moghisei. British newspaper the Independent reported that Nobakht and her husband Dariush Taghipoor "have lived in the Stockport suburb of Heald Green for the past six years and have both been granted dual British-Iranian nationality. Mrs. Nobakht had previously been a student at Stockport College, but a spokeswoman said today she had left four years ago."

According to the Independent, her husband Dariush Taghipoor told a family friend in England that his wife was arrested for comments she made on a Facebook group about the government, in which she said it was "too Islamic" and that she was only charged after a confession was extracted from her "under duress."

She has lost a significant amount of weight while in prison, according to reports. International human rights groups have called for her release but it is currently unknown whether she will even be granted an appeal.