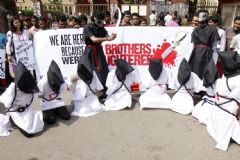 Protesters against executions carried out by Saudi Arabia (File photo)

A specialised criminal court in Riyadh, the Arab kingdom's capital, sentenced Munir al-Adam, to death for "attacks on police" and other offences they said took place during protests in the Shia-dominated east in late 2011.

The 23-year-old is partially blind and was already partially deaf at the time of arrest; he alleges he is now completely deaf in one ear as a result of being severely beaten by police.

His family issued a statement rejecting the verdict and claiming that Mr Adam was tortured into confessing, The Times reported.

The steel cable worker said he had only signed a document admitting the offences after being repeatedly beaten. He said he had been accused of "sending texts" when he was too poor to own a mobile phone.

Forty-seven protesters and alleged supporters of al-Qaeda were executed in a single day in January. In July, the number of beheadings in Saudi Arabia reached 108 this year, putting the country, which has a population of nearly 29 million people, on track to exceed its 2015 execution total.

Saudi Arabia is one of the world's most prolific executioners. Research last year by human rights organisation Reprieve found that, of those identified as facing execution in Saudi Arabia, some 72 per cent were sentenced to death for non-violent alleged crimes, while torture and forced confessions were common.

"Munir Adam's appalling case illustrates how the Saudi authorities are all too happy to subject the most vulnerable people to the swordsman's blade," said Maya Foa, of Reprieve. "Saudi Arabia's close allies, including the UK, must urge the kingdom to release Munir, along with juveniles and others who were sentenced to death for protesting."

The traditionally close relationship between Saudi Arabia and Britain has become strained in the past year as people in the West have protested against the use of the death penalty, including against minors. Protests also erupted across the Middle East in January.

Sara Hashah, Amnesty International's Middle East and North Africa spokesperson, said Saudi Arabia, Pakistan and Iran were responsible for 90 per cent of all recorded executions globally and were out of step with the rest of the world.

"In Saudi Arabia, where people are routinely sentenced to death after grossly unfair trials, we have seen a dramatic surge in the number of executions in the past two years which has shown no sign of abating in 2016," she told The Independent in July.

"This clearly demonstrates that Saudi Arabia's authorities are increasingly out of step with a global trend of states moving away from the death penalty.

"Saudi Arabia's authorities must end their reliance on this cruel, inhuman and degrading form of punishment immediately."

Mr Adam was reportedly detained in February 2012 for taking part in protests in his home town of Qatif the previous year, when he was 18 years old.

The Qatif region of Saudi Arabia is majority Shia. There are regular protests in the area against the Saudi government.

Mr Adam's family said he was a kind, simple young man who loves fishing. They said he was involved in an accident when he was six in which his skull was fractured, leaving his sight and hearing impaired. He was told by his doctor that trauma could worsen the injuries, but police allegedly ignored medical evidence and beat him anyway.

He is currently appealing his sentence.

Reprieve said: "Munir's bogus 'confession' was the sole piece of evidence presented against him at his trial. He has never been allowed to speak to a lawyer."

The organisation added that concerns for Mr Adam's fate come shortly after the re-election of Saudi Arabia to the UN Human Rights Council.