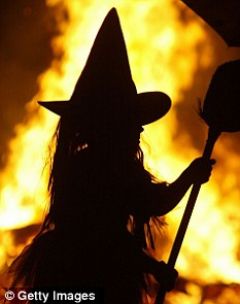 Accused of witchcraft: A Sri Lankan woman faces being beheaded after allegedly casting a spell on a 13-year-old girl during a shopping trip in Saudi Arabia

A Sri Lankan woman has been arrested on suspicion of casting a spell on a 13-year-old girl on a shopping trip in Saudi Arabia.

She may face the death penalty as the Middle Eastern country is known to behead convicted sorcerers.

The daily Okaz reported that a Saudi man had complained his daughter had 'suddenly started acting in an abnormal way and that happened after she came close to the Sri Lankan woman' in a large shopping mall in the port city of Jeddah.

'He reported her to the security forces, asking for her arrest and the specialised units dealt with the situation swiftly and succeeded in arresting her,' Okaz said.

Saudi Arabia, a U.S. ally, is an absolute monarchy that has no written criminal code and where court rulings are based on judges' interpretation of Islamic Sharia law.

'The punishment is always beheading for anyone found guilty of witchcraft,' a Saudi lawyer and human rights activist, Waleed Abu al-Khair said.

In December, Amnesty International condemned the beheading of a woman in Saudi Arabia convicted on charges of 'sorcery and witchcraft' saying it underlined the urgent need to end executions in the kingdom.

Amnesty said the execution was the second of its kind last year.

A Sudanese national was beheaded in the Saudi city of Medina in September after being convicted on sorcery charges, according to the London-based group.