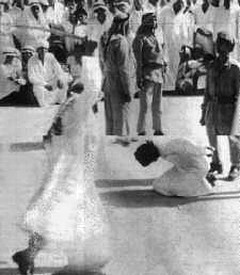 "A Saudi convicted of murder was beheaded by the sword on Thursday, adding to a total already more than double the number of executions in the Gulf kingdom in 2006, the interior ministry announced.

His beheading raises to 86 the number of executions carried out this year in the ultra-conservative Muslim state, the highest tally since 2000 when at least 113 people were executed.

In 2006, at least 37 people were executed in the oil-rich country, while 83 were put to death in 2005 and 35 the year before, according to AFP tallies based on official statements.

Executions are usually carried out in public in Saudi Arabia, which applies a strict form of sharia, or Islamic law. Rape, murder, apostasy, armed robbery and drug trafficking can all carry the death penalty."