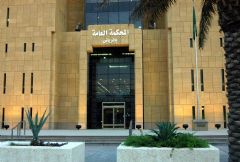 The General Court in the Saudi capital Riyadh

Saudi authorities on Monday beheaded a Nepalese housemaid convicted of murdering a two-year-old boy by slitting his throat, the interior ministry said.

The maid was found guilty of "slaughtering with a knife" the Saudi toddler Osama bin Maeed al-Enzi, the ministry said in a statement carried by SPA state news agency.

The ministry said the maid was executed in the northern city of Arar without providing further details of the crime.

In a second execution on Monday, Saudi national Hamad al-Ahmadi was decapitated in the holy western city of Medina for stabbing his wife to death while she was asleep, another ministry statement said.

The latest executions brings to 17 the number of death sentences carried out this year in the ultra-conservative kingdom.

Saudi Arabia beheaded 78 people in 2013, according to an AFP count.

Last year, the UN High Commission for Human Rights denounced a "sharp increase in the use of capital punishment" there since 2011.

According to figures from rights group Amnesty International, the number of executions rose from 27 in 2010, including five foreigners, to 82 in 2011, including 28 foreigners.

In 2012, the number of executions dipped slightly to 79, among them 27 foreigners.