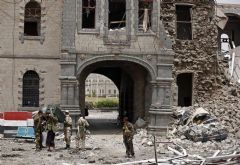 A Saudi-led airstrike this week hit a public bus on a highway in southern Yemen linking the city of Aden with the north, killing at least 20 passengers, witnesses and officials said Thursday.

Another set of airstrikes hit a family traveling in a private car, a farmer driving a pick-up truck loaded with potatoes, also near Aden this week, as well as a group of anti-rebel fighters in a southwestern city.

The casualties underscore the losses and dangers faced by Yemeni civilians increasingly caught in the crossfire as the Saudi-led coalition targets the country's Shiite rebels, known as Houthis, in a bid to stop their advances.

The Saudi-led campaign and ground fighting in Yemen have killed 1,037 civilians, including 234 children, between mid-March and May and displaced more than a million people, according to U.N. estimates.

In a joint statement Thursday, 13 international aid groups appealed for a permanent ceasefire, saying 80 percent of Yemen's population has been affected by violence and is in need for assistance.

"Millions are at risk of dying from the conflict, preventable diseases, and hunger," said Hanibal Abiy Worku, Norwegian Refugee Council's director in Yemen.

In May, a five-day pause was violated repeatedly, and aid groups said it was hardly sufficient to reach millions in the Arab world's poorest country. U.N.-mediated peace talks aimed at ending the conflict are due to take place on June 14 in Geneva.

The Geneva-based Medicins Sans Frontieres, or Doctors Without Borders, said in a statement Thursday that at least 100 people were wounded in a single day of violence, on Wednesday, in Aden, overwhelming hospitals already suffering shortage of medical supplies.

This week's civilian casualties from airstrikes were confirmed by a senior military official running an operations room in Aden allied with the Saudi-led coalition. He told The Associated Press over the phone that he had complained to the Saudis about the incidents. The Iranian-backed Houthis seized the Yemeni capital, Sanaa, last year and much of northern region. The U.S.-backed coalition launched its airstrikes campaign on March 26.

The Houthis have been joined by soldiers loyal to ousted President Ali Abdullah Saleh in battles pitting them against tribesmen and fighters in southern provinces.

The bus was struck Tuesday on the highway between Aden and the city of Taiz. The bodies of the passengers lay strewn by the roadside in the area of al-Rabat for a whole day, before they were retrieved and brought to Aden, said a resident in the city, Walid Salami. There were children and women among them, he said.

"People were afraid to come to the rescue of those injured because of the airstrikes," added Salami, who had seen the remains of the victims as he drove by the bus on Wednesday. He said bodies of some of the children were still in their seats.

The highway is used by Houthis to send reinforcements to Aden, witnesses said, adding that there were at least 10 vehicles carrying fighters that were also hit in the airstrikes, not far from the bus that was struck. The number of Houthi casualties remained unknown and the witnesses spoke on condition of anonymity, fearing reprisals.

In Sheikh Osman, another war-torn area on the outskirts of Aden, at least five other vehicles carrying Houthi fighters were set ablaze when missiles hit them Monday, officials said. Two people in the private car and the farmer also were hit and killed by airstrikes Monday in a nearby area, officials and witnesses said.

A nearly empty residential building in a northern district of Aden was hit by missiles Wednesday, killing two civilians, the officials said.

According to MSF, more than 100 people were wounded - including a group attending a funeral - after they came under heavy shelling in Aden's residential area of al-Bassateen on Wednesday. Shells also landed close to the MSF hospital on Thursday, the group said.

"Hospitals in Aden are full - some are placing mattresses in front of their front gates to accommodate patients," said Thierry Goffeau, the group's director in Aden.

In the southwestern city of Dhale - which anti-rebel forces recently captured from the Houthis - at least 20 of the anti-Houthi fighters were accidentally killed as Saudi-led coalition warplanes targeted the rebels there Tuesday, several fighters said.

The officials and anti-Houthi fighters spoke on condition of anonymity because they were not authorized to talk to reporters.