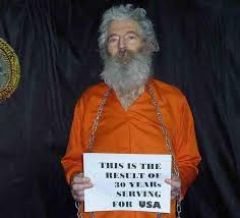 But there's no "if" in the eyes of his children, who refuse to give up hope and are convinced he's very much alive, and being held by the Iranian regime.

"He is being held against his will, with no human rights or access to his family," David Levinson, 31, told Fox News in an interview last week. "It's inconceivable that, almost 12 years later, we have no answers. The Iranian government knows what happened to my father and needs to send him now. We continue to push for more action by our government, and awareness of his case worldwide."

Despite unconfirmed reports their father died in Iranian custody, his family believes he is "alive and trying every day to come home."

The last affirmed proof of life emerged in late 2011, with photos of him donning an orange jumpsuit. Despite those images, Iranian officials have insisted they have no knowledge of him, and are not holding him as a political prisoner.

"We talked to many people prior to 2010 who though my father passed away in captivity, and the proof-of-life video and photos proved them wrong. We do not know where he currently is, but know that he was taken on Iranian soil by the Iranian government," David Levinson continued. "We have no reason to believe he is not in Iran."

The United Nations Working Group on Arbitrary Detention in 2017 stated Iran was indeed responsible for Levinson's capture, and his "continued deprivation in liberty."

And in December, Secretary of State Mike Pompeo acknowledged several "innocent Americans" are being held hostage globally, highlighted Levinson's case, and spoke of the need for him to be released. The FBI has a offered a five million dollar reward for information that could lead to his safe return.

For his family, no efforts or public declarations will be enough - until he's home.

"We know this is a government-to-government issue, so we need President Trump's help to make this the first priority in any discussions with Iran," David said. "We know that Iran can send him home. We believe our father is alive and fighting every day to come home to us. We know that President Trump and the Iranian government have the means to work out a deal in which he can be brought home."

Levinson, who was 58 when he disappeared in March 2007, had spent decades as a devoted DEA and FBI agent. He was retired and on contract with the CIA when he boarded a flight from Dubai to the Persian Gulf resort known as Kish Island. He was allegedly investigating cigarette smuggling and meeting with a possible Iranian source who was being targeted for CIA recruitment.

"The advice and the steadiness he brought to our lives is what I miss the most," David added. "He is the kindest, most compassionate man you could ever meet. He lights up a room and leaves an impression on everyone he meets. My dad is a wonderful family man. We just want him back home with his family where he belongs to live the rest of his life quietly surrounded by people who love him."