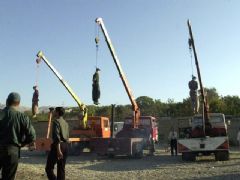 A hanging in Iran.

Stop the Executions by the Islamic Republic of Iran

Shadi Paveh, a prominent Iranian human rights activist, is launching an international petition to "stop the executions in Iran."

The Islamic Republic of Iran currently ranks first for per capita executions in the world. In a time where the world is naively rejoicing in the election of a "moderate" new Iranian president; Iran has stepped up its executions dramatically since the elections of June 2013. It is estimated, that on average, Iran hangs someone every seven hours, inhumanely from cranes, for some 131 capital offences which include a wide range of crimes such as murder, adultery, drug trafficking, rape, homosexuality, apostasy and vaguely worded offences such as "enemy of God" and "corrupters on earth".

The majority of the 131 capital offences are non-lethal acts and should not be criminalized according to international human rights standards.

Unlike the execution of those killed for criminal offences mentioned above (which are often announced by the regime in national newspapers), the executions of political prisoners, however, are very rarely reported. In the Islamic Republic of Iran, the slightest act of dissidence or criticism of the government is met with arrest, imprisonment, unspeakable torture and usually execution.

Additionally, the regime has devised a clever, new method of executing political prisoners silently by withholding urgently needed medical care required for either injuries sustained during torture or pre-existing medical conditions such as diabetes. The regime then simply announces that the prisoner died from natural causes in prison, thus avoiding reporting the death as an execution.

The actual number of executions is a state secret and the authorities permit only a proportion of death sentences and executions to be reported to the public. Furthermore, Iran remains one of few countries that has executed juveniles as young as 12 by firing squad. Today, Iran claims they no longer execute juveniles, which is due to the fact that the minor in question is kept in prison until he reaches the age of majority at which time he/she can be executed as an adult. Iran continues to carry out large number of hangings in public where children as young as three have been seen among the crowd of onlookers.

It is also worth emphasizing that the accused are rarely granted the right to a lawyer in trials that last only minutes in absence of a jury or evidence; with the majority of presiding judges usually trained only in Islamic law making each and every sentence handed down by the Islamic Republic illegal under international law.

Iran remains one of the few countries that practices stoning of both men and women for adultery. There are currently 12 individuals in Iran awaiting this horrific and grotesque form of execution. It is believed that 200 individuals have been stoned in Iran thus far; the majority of whom are young women. Adulterers are bound and buried to the chest or waist and are slowly stoned to death which can take many hours. In recent years, Iran has been carrying out stonings in secret in order to avoid strong international criticism.

Help us stop the executions in Iran by signing this petition.