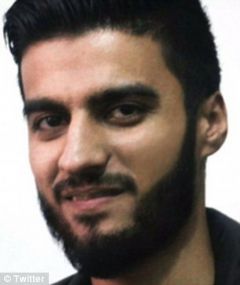 Syrian activist Ibrahim Abdul Qader, 20, was beheaded at his home in Sanliurf

The beheaded bodies of a Syrian activist opposed to the Islamic State group and his friend were found early Friday in the southern Turkish city of Sanliurfa.

Ibrahim Abdul Qader, 20, and his friend Fares Hamadi were found beheaded at home this morning.

The shocking news was confirmed by Abu Mohammad, a founder of the 'Raqa Is Being Slaughtered Silently' group, who posted hte news on social media.

The acctivist group, which documents abuses in areas under IS control in Syria, accused the jihadist organisation of the murders on its Facebook page.

Several prominent ISIS accounts on social media have claimed the vile jihadi group was responsible for the horrific assassination in Turkey.

'I don't know what to say. One of our member called ' Ibrahim ' and another friend 'Fares' was found slaughtered in their house today morning,' activist Abu Mohammad wrote.

Both victims were from the ISIS held city of Raqqa but had fled to Turkey around a year ago.

All four men were forced to wear red boiler suits and were taken out to a remote part of the Syrian countryside before they were executed.

Seven Syrians were arrested by Turkish police following the beheadings, according to Dohan media agency in Turkey.

Sanliurfa is 55 kilometres (35 miles) from Turkey's border with Syria's Raqa province, a major IS stronghold in the country.

Turkey has long been accused by Syrian opposition activists, Kurdish fighters and sometimes even Western partners of allowing IS members to slip back and forth across its 911-kilometre (566-mile) frontier with Syria.

Bloody bomb attacks in southern Turkey, including an attack in July that claimed 32 lives in Suruc, have been blamed on IS, though the group has never claimed responsibility for the blasts.