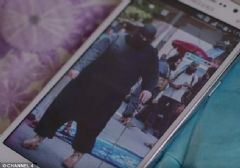 A 14-year-old Syrian boy has described his horrific ordeal at the hands of an ISIS militant dubbed 'The Bulldozer' - who hacked off his hand and foot because he refused to join the terror group.

The teenager, known only as Omar, was serving with more moderate opposition forces trying to overthrow Syrian President Bashar al-Assad's regime when he was captured by the Islamic State.

He says the extremist group strung him up and tortured him for a month and a half in a bid to get him to join their growing ranks of children. When he refused, he was dealt a shocking punishment.

In an interview with Channel 4 from his new home in a Turkish border town, Omar describes how militants gathered a crowd in the middle of a street, before tying down his right hand and left leg.

Speaking in Arabic, he tells reporter Evan Williams: 'They put my hand on a wooden block and cut if off with a butcher's knife. Then they cut off my foot and put them both in front of me for me to see.'

The brave teenager, who was bleeding heavily and in unimaginable pain, was forced to look up at his own severed extremities as the crowd of men, women, children and terrorists watched.

He shows Williams photos of his hand and foot being hacked off with the enormous blade - and an image of the militant who carried out the amputations, a massive man called 'The Bulldozer'.

He describes how 'The Bulldozer' and fellow militants sought out other teenagers and children in the area ahead of the horrifying public display - as a warning to them not to resist the Islamic State.

'They brought teenagers and children and told them, "this man is an infidel so we will cut off his hand and foot",' says Omar as he rests his right stump - wrapped in a large bandage - on his lap.