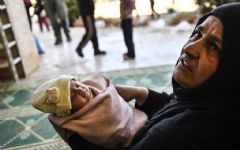 A woman who was used as human shields by the Islamic State holds a new born baby after fleeing from the center of Raqqa, Syria, October 6, 2017

As fighters from the Islamic State group retreat into a shrinking part of Syria's Raqqa, they are dragging along terrified civilians for cover against a ferocious US-backed onslaught.

Locals who managed to flee describe being herded into apartments in buildings used by jihadists as makeshift military bases, and serving as human shields for fighters as they collect water.

Civilians say the tactic - used elsewhere by the group to slow its opponents - is increasingly putting them in the crosshairs of US air power and allied fighters as they battle IS in densely populated districts near Raqqa's center.

Raqqa resident Umm Alaa and her family were twice forced to provide cover to IS jihadists, she told AFP, hours after her escape from the city.

"Weeks ago, an Iraqi (IS) fighter came to our house in Al-Barid and told us it had become a military zone," she said, sitting on a plastic chair outside a mosque in Hawi al-Hawa, a western suburb of Raqqa controlled by the US-backed force.

IS moved her with her husband, their son Alaa and two-year-old grandson Hassan into a nearby building and refused their pleas to return home.

Three days later, jihadists displaced them again, this time to a damaged building with other families in the battle-ravaged district of Al-Badu.

"They were holding us as human shields. They were keeping us there to protect themselves," said her husband Abu Alaa, a thick leather belt holding up the oversized trousers hanging off his bony frame.

"Daesh told us, 'If you leave Raqqa, they are going to destroy the whole city over our heads,'" he said, using the Arabic acronym for IS.

The whole family escaped on foot with other civilians on Friday, and like all the civilians who spoke to AFP, they declined to give their full names for fear of retribution against friends and relatives still stuck inside the city.

The US-backed Syrian Democratic Forces broke into Raqqa in June, and has since captured around 90 percent of the city, with the help of heavy US-led airstrikes.

Tens of thousands of civilians have fled, but with fighting and airstrikes concentrated on a shrinking IS-held section of the city, the exodus has slowed to a trickle.

As its options dwindle, jihadists are taking up positions inside residential buildings, said Mohannad, a fair-skinned woman with pale green eyes who also escaped Al-Badu with her four children.

"They tried to move into the basement or the first floor of our buildings because it protected them from airstrikes," she told AFP.

IS fighters sought out apartments left behind by fleeing families, so Mohannad began putting out clothes and blankets on the balconies of empty ones to trick jihadists into thinking they were occupied.

She and her children were forced to move four times, and when they were moved into Al-Badu there was little to eat.

They were not allowed to leave except to draw water from nearby boreholes.

And even then, the trips were a way for IS fighters to move using civilian cover, said Umm Mohammad, a heavyset woman who also fled from Al-Badu.

"At the wells, Daesh would allow its fighters to fill up water first and made civilians wait for hours to protect them from airstrikes," she said.

Her eldest son Mohammad, 19, would leave home at 4:00am to draw water from a nearby well and often not return for six hours.

"Days ago, he left but never came back. We learned there was an air strike there. I couldn't even find his sandals."

The Syrian Observatory for Human Rights monitor said a US-led strike killed 18 civilians gathered at a water well in Raqqa on Tuesday. AFP could not confirm if Mohammad was among them.

'We're in the middle'

In late September, the coalition acknowledged the deaths of 735 civilians in its strikes on Syria and Iraq since 2014, but the Britain-based Observatory says hundreds have been killed in Raqqa alone since June.

Among them, said Umm Alaa, was her son, a pharmacist who was killed in a raid as he helped wounded civilians.

"To kill a single Daesh fighter, 10 civilians are being killed," Umm Alaa said, her voice cracking as she put black socks on the tiny feet of Alaa's son, her grandson Hassan.

"They fire at each other and we're in the middle."

"The Coalition takes extraordinary care in our planning and operations to ensure no harm is inflicted upon innocent civilians," he told AFP.

But those precautions "are not sufficient," said Nadim Houry, director of Human Rights Watch's terrorism and counter-terrorism program.

"Civilians could be saved. That may mean at times slowing down the operation, advancing more slowly, taking more precautions, maybe not using a massive bomb against a sniper," he told AFP.

Houry said relying on drone footage to determine whether civilians were present before a strike was not enough precisely because they were trapped inside homes.

"The battle isn't just about retaking a particular building or retaking square meters. Ultimately it's about protecting civilians."