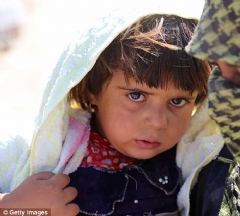 Hungry and thirsty: A Yazidi girl

Waving their weapons and cheering, Islamic State jihadis stood over bodies and celebrated as they buried 500 Yazidis alive

Women and children have been buried alive in mass graves by the fanatics terrorising Iraq, it was claimed last night.

Up to 500 members of the ancient Yazidi sect have suffered the appalling fate, according to an Iraqi minister.

Fighters from the Islamic State group are also accused of kidnapping 300 women to use for sex or as domestic slaves.

Some 150,000 Yazidis fled their homes after the militants overran their main town of Sinjar in northern Iraq last week.

The fresh claims of horrific atrocities will add to pressure on the West to take further action to halt Islamic State's relentless expansion through Iraq.

Mohammed Shia al-Sudani, who is Iraq's human rights minister, said that he had seen pictures of militants cheering and waving their weapons over lines of dead Yazidis.

'We have striking evidence obtained from Yazidis fleeing Sinjar and some who escaped death, and also crime scene images that show indisputably that the gangs of the Islamic State have executed at least 500 Yazidis after seizing Sinjar,' Mr al-Sudani told reporters.

'Some of the victims, including women and children, were buried alive in scattered mass graves in and around Sinjar.'

Tens of thousands of Yazidi refugees who fled the militants' advance found themselves trapped on barren Mount Sinjar last week.

Scores of children, women and elderly people died of dehydration and starvation as their food and water supplies ran out in scorching temperatures.

Shocking images published last night showed children bleeding with their heads bandaged, the face of one of them contorted with pain.

In a harrowing video sequence, figures are seen trying to resuscitate a woman who appears to be dead.

The images, which were impossible to verify independently, were apparently taken on Mount Sinjar.

It emerged yesterday that as many as 30,000 of the desperate Yazidis have managed to escape to relative safety in Kurdish-controlled northern Iraq. Kurdish peshmerga fighters helped them across the border into Syria and the refugees then made their way by land to the Fishkhabur crossing back into Iraq â a total journey of around 65 miles.

Frightened Yazidi families were carried through Syria by Kurdish troops in trucks, on donkeys and even in the front buckets of bulldozers.

Among them was Douad Ibrahim, a 49-year-old farmer, who reached the Syrian border yesterday after seven days of being pursued by the jihadists, followed by a 12-hour walk with his wife and nine children to the Syrian border.

Breaking down in tears as he gulped down glasses of water, he said: 'Please don't ask me about the situation because there are no words to describe it.

'I am so sad. I have seen when the children died, when women died from dehydration, when we were being shelled by the Islamic State. For all that time we were living under the shadow of death.'

Iraqi MP Vian Dakhil, herself a Yazidi, said that between 20,000 and 30,000 people had managed to get out via the Syrian border.

But she added: 'There are still thousands on the mountain. The passage isn't 100 per cent safe. There is still a risk.'

'They were taken out and these men raped women and girls in front of their men, then killed all the children before the eyes of their parents who were begging mercy for their children,' she said.

She also gave a graphic account of the horrendous scenes on Mount Sinjar as the terrified Yazidi awaited rescue.

'Over the days increasing numbers of children, women and elderly died in front of the eyes of their loved ones who could do nothing,' she said.

'I saw one child asking for food, then become unconscious and die. A pregnant woman died while giving birth to her baby from bleeding â both mother and infant died at the same time. An old man died of cardiac failure, perhaps caused by heat, stress and lack of medicine.'

Miss Shangali said the horror continued until Friday, when Kurdish special forces opened up a road from the mountain into Syria.

US warplanes bombed Islamic State fighters in northern Iraq for a third successive day yesterday with the aim of protecting Kurdish forces helping the refugees.

An RAF Hercules aircraft made the first drop of British aid to refugees in the Sinjar mountains on Saturday night.

Iraqi officials claimed that many of the Americans' emergency supplies had been destroyed on impact because they were dropped from a great height without parachutes.

There were mixed signs about the success of attempts to push back the Islamic State. Kurdish forces retook two towns in northern Iraq that had been captured by the militants.

But the US State Department announced it was moving some staff from its consulate in the Kurdish capital of Irbil because of the deteriorating security situation.

The Islamic State captured Iraq's largest dam near Mosul last week, raising fears it could blow up the structure to cut off power supplies or even flood cities downstream including the capital Baghdad.