U.N. Inaction on Burundi
All Actions of the UN Human Rights System Critical of Specific States, 2010 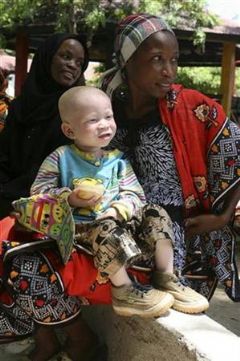 NAIROBI, Kenya - Attackers in Burundi chopped off the limbs of a 5-year-old albino boy and pulled out his mother's eye, killing them over the belief that their body parts would bring wealth and success, human rights activists said Friday. Those deaths and other recent attacks in Tanzania are part of long pattern of violence against African albinos. At least 10,000 have been displaced or gone into hiding since attacks against them spiked in late 2007, the International Federation of the Red Cross says.

Since then, 57 albinos have been killed in Tanzania and 14 in Burundi, said Vicky Ntetema with the rights group Under The Same Sun.

The killings are fueled by superstitious beliefs that human albino body parts will bring others wealth and success, Ntetema said.

"Body parts are sought for their supposed miraculous powers," she said. "Some use them as human sacrifice as advised by witch doctors."

African albinos endure insults and segregation throughout their lives, and face greater discrimination than Western albinos because they live in darker-skinned communities. They also have a high risk of contracting skin cancer in a region where many jobs are outdoors.

Both victims had their limbs chopped off. Attackers also pulled out one of Desire's eyes and chopped off his mother's breasts, Kazungu said. The attack took place in Cankunko village in the Cendajuru district, about 200 kilometers (125 miles) east of the capital city, Bujumbura.

Kazungu said Thoma Vyegura, who was not albino, was also killed while trying to protect his daughter and grandson. The IFRC said in report last year that the market for albino parts exists mainly in Tanzania, where a complete set of body parts - including all limbs, genitals, ears, tongue and nose - can sell for $75,000.

Albino children who are not killed at birth will often face discrimination, ridicule and stigmatization by family and friends, Ntetema said.

Mothers often refuse to breast-feed albino babies and husbands accuse women of sleeping with white Europeans, leading to divorces. In Africa most albino children are brought up by single mothers, she said.

Before Monday's killings, five other albinos have been attacked in Tanzania since February. One of those albinos died, Ntetema said.

"People believe in witch doctors more than they believe in God because they cannot see God," she said. "It is going to take a long time to change people, but if we start with the young ones then there can be change."